Horatio Sanz allegedly began grooming a teenage Saturday Night Live fan in 2000, and allegedly eventually sexually assaulted her, according to a new lawsuit, which was filed against Horatio, NBC Universal and SNL. The lawsuit lists the plaintiff as Jane Doe, who is identified as a former Saturday Night Live fan. At just 14 years old, Jane Doe allegedly came in contact with SNL cast member, Horatio, after posting on SNL message boards and chatrooms in 1999.

The lawsuit claims that Horatio and other SNL cast members, as well as NBC employees, read the messages, leading to Horatio and Jimmy Fallon allegedly e-mailing Jane Doe in Jan. 2000. “Thereafter, Sanz began his process of grooming Plaintiff,” the documents allege. In Oct. 2000, the two met in person for the first time after an SNL taping. “Sanz was flirtatious and physically affectionate with the then 15-year-old Plaintiff by kissing her cheek and putting his hands on her waist,” Jane Doe claims in her account of the alleged assault. 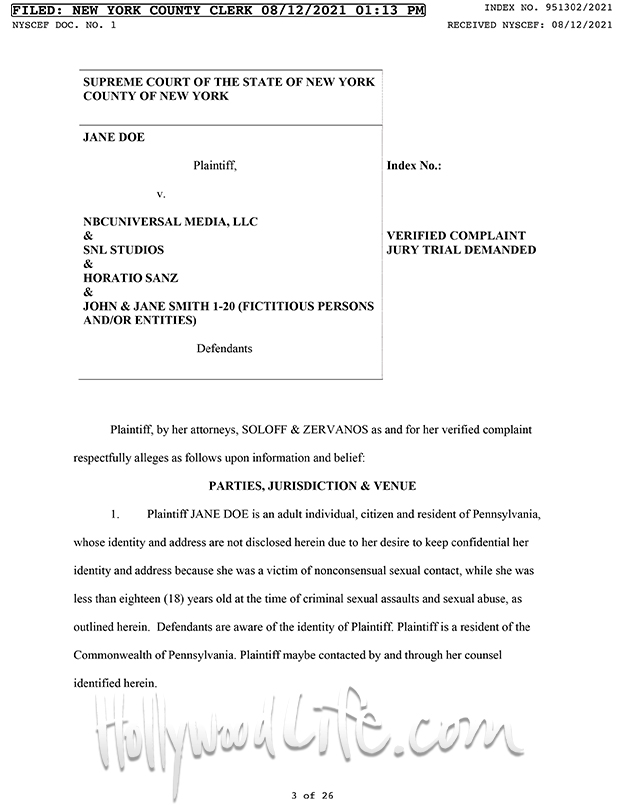 Jane Doe continued to attend SNL events throughout 2000 and 2001, and eventually began attending after-parties for the show when she was just 16 years old. The lawsuit claims that Jane Doe was served alcohol at these parties, despite it allegedly being known that she was underage at the time. In May 2001, she was allegedly given a tour of the SNL offices, when the first instance of alleged sexual assault occurred.

Stars As Politicians On SNL -- PICS

“Defendant Sanz signaled Plaintiff over and guided her to sit on his lap with her legs positioned between his legs and his arms around her hips, waist and buttocks,” Jane Doe alleges. She also claims that her communication with Horatio continued via private conversations on AOL Instant Messenger after that. “The August 23, 2001 messages started an incessant exchange of communications in which Defendant Sanz groomed and molested Plaintiff,” the lawsuit says. “In these communications with Plaintiff, Sanz regularly and repeatedly asked for photos of her.” 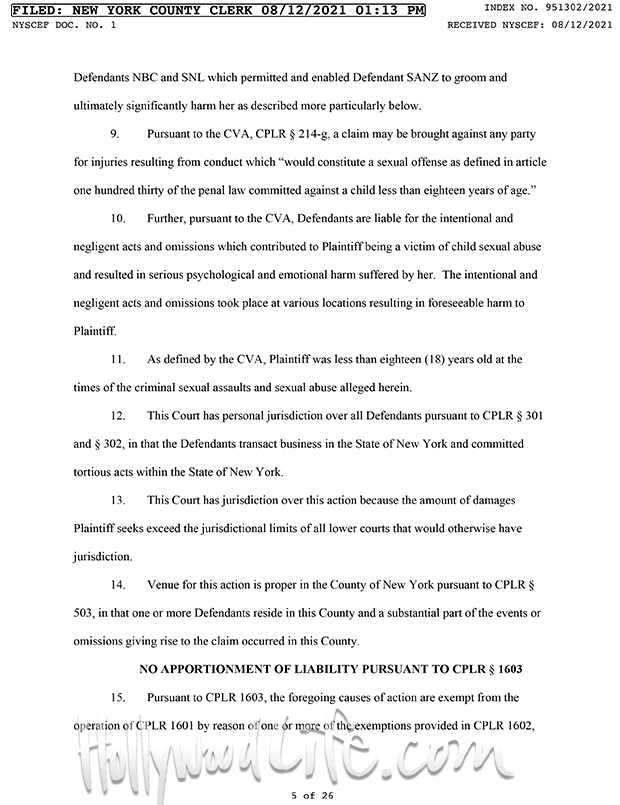 Another instance of sexual abuse allegedly occurred in May 2002. “Defendant Sanz intentionally touched the Plaintiff’s sexual or intimate parts for the purpose of degrading or abusing Plaintiff and/or sexual gratification,” Jane Doe alleges. NBC employees are also accused of witnessing instances of Horatio’s alleged sexual assault.