Gigi Hadid revealed in a new interview that during her pregnancy with daughter Khai, she outlined her fears and anxieties about becoming a mother in a “bad” journal.

For the past 10 months, Gigi Hadid, 26, has been living in her glory as a proud mom to daughter Khai. But, like many first-time expectant moms, Gigi — who shares her daughter with Zayn Malik, 28 — suffered anxieties about becoming a mother while she was pregnant. “During my pregnancy, I had one journal that I called my good journal and one journal that I called my bad journal,” the supermodel said in the August 2021 issue of Harper’s Bazaar. “They weren’t that literal, but one was more for the memories, for Khai. Maybe one day I’ll give her the bad journal just to be real about it,” Gigi added.

The “bad journal,” Gigi said, was where the star would pour out her “anxieties and days where I felt like, ‘Am I good enough to be a mom?’ ” She added: “I didn’t want to feel guilty about feeling those things or writing those things down I just liked the separation.” Gigi also said that, in order to get her bottled up thoughts out, she would even journal on sketch pads and on the back of receipts. “I’m not particular about it, and my journals are everywhere around the house,” she told the publication. “I just pick up whichever one is closest to me and write.”’

Gigi’s hobby of journaling was not new for the model, though she did do it more than ever since her pregnancy was during the COVID-19 quarantine. “I deal with a lot of things through just sitting and thinking and writing,” she told Harper’s Bazaar. “People made jokes when Covid hit, like, ‘Oh, Gigi, you’ve been practicing quarantine for years now,’ because when I had a few days off, I would drive to the farm from the city and be with myself in my little cabin, making a resin chair or drying flowers,” she added.

Gigi Hadid On The Runway -- PICS 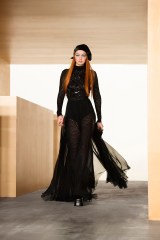 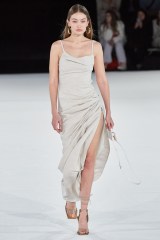 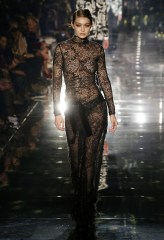 Gigi also gushed over Khai in the interview. “She loves the birds, the animals. It’s nice to be outside after a long winter,” Gigi said. When Gigi and Zayn brought their daughter to the Metropolitan Museum of Art and the American Museum of Natural History in New York, Khai could not stop staring at the dinosaur displays, according to Gigi, who added that her daughter has also taken a liking to the jellyfish on the couple’s television’s screen saver. “Zayn had the idea, he’s like, ‘We should take her to the aquarium,’ ” she told the publication.

Since welcoming Khai in Sept. 2020, Gigi and the former One Direction bandmate have tried to avoid their daughter being photographed in public. On July 5, Gigi begged in a Twitter post for paparazzi, fans, and press outlets to blur out their daughter’s face if they ever catch a snapshot of the little one. “Our wish is that she can choose how to share herself with the world when she comes of age, and that she can live as normal of a childhood as possible, without worrying about a public image that she has not chosen,” the supermodel said.