Tennessee Senator Marsha Blackburn hasn’t forgotten when Taylor Swift told her fans Blackburn had an ‘appalling voting record’ in 2018. Now, Marsha has taken a big new swipe at the singer.

Tennessee Senator Marsha Blackburn, 69, used Taylor Swift, 31, as an example when she bizarrely described a fantasy in which the U.S. was under a Marxist government in the future. Blackburn accused the “left” of “trying to change country music [and] make it woke,” during an interview with conservative outlet Breitbart on Thursday July 8. She claimed that she regularly tells entertainers, “If we have a socialistic government, if we have Marxism, you are going to be the first ones who will be cut off, because the state would have to approve your music.”

Blackburn, who is a Republican, was elected to the Senate in the 2018 midterm elections. She was identified by the “Shake It Off” singer, when she originally broke her silence about politics in October 2018. At the time, Swift publicly announced her support for Blackburn’s opponent for Congress, Democrat Phil Bredesen in the Senate race, as well as Democrat Jim Cooper for the House of Representatives.  “[Blackburn’s] voting record in Congress appalls and terrifies me,” Swift wrote on Instagram, naming Blackburn’s vote against equal pay for women and her vote against the Reauthorization of the Violence Against Women Act. While Cooper won his race, Blackburn defeated Bredesen, and she’ll be up for re-election in 2024. In 2019, Taylor also dissed Blackburn in the Netflix documentary Miss Americana, when she called the senator “[Donald] Trump in a wig.”

It seems like Swift’s call out really left an impact on Blackburn, because she jumped right to her in the Breitbart interview as an example of an artist who would supposedly be silenced by a future Marxist or socialist government. “Y’know, Taylor Swift came after me in my 2018 campaign, but Taylor Swift would be the first victim of that, because when you look at Marxist, socialist societies, they do not allow women to dress or sing or be onstage or to entertain or the type [of] music she would have. They don’t allow protection of private intellectual property rights,” she said. [For your information: Democrats have never campaigned on a Marxist platform.] 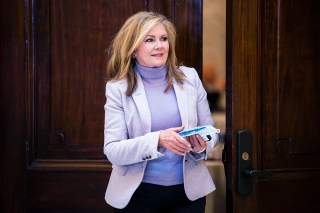 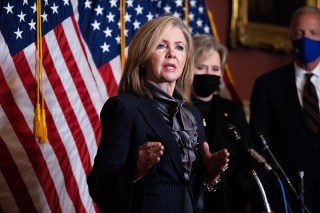 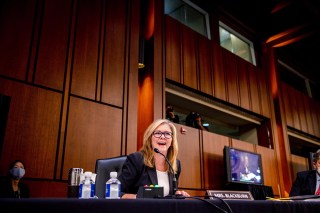 Blackburn seemed to gloss over the fact that Swift has been a staunch advocate for intellectual property rights. Swift has been feuding with music mogul Scooter Braun for years, particularly due to his ownership over her original master recordings of her early records. Her anger over the original recordings has led her to a new project where she’s re-recording and re-releasing all of those albums, the most recent of which will be Red (Taylor’s Version). The senator and popstar are also both noted supporters of reforming the Digital Millennium Copyright Act (DMCA) to help strengthen artists’ ownership over their music, via WKRN.

It’s important to point out that there are governments around the globe that have socialized programs, such as Denmark, which has social programs for childcare, education, and maternity or paternity leave, via U.S. News. Many other countries also have socialized medicine with universal healthcare, including Denmark, the U.K. and Canada, just to name a few. None of these countries have restrictions on the ways that women “dress” or “sing” or “entertain,” as they all have a form of laws protecting freedom of expression. In fact, the current Prime Minister of Denmark is a woman, Mette Frederiksen.

The clip of Blackburn ended with her showing support for conservative voices in the music industry, such as contemporary Christian singer Michael W. Smith, and hoping that Republicans’ messages can reach artists. “My hope is that the message is resonating with a lot of people around them and thereby with them. We have some incredible voices in the music industry, who are good, solid, God-fearing, freedom-loving, flag-waving men and women, and I am grateful for them everyday, because they truly are a role model for so many millions of Americans,” she said.