Every bright light casts a shadow, and after years in the spotlight, Baby Ariel has introduced her millions of supporters to her own dark side on blue. On the new EP (out today, July 9), the award-winning actor, singer, and social media sensation (dubbed the “Queen of GenZ”) embodies a darker and mature sound over the course of six entrancing tracks. From the opener “charlie” to the fuzz-fueled “nothing” to the climatic “heaven,” Ariel shines like polished onyx on blue, making the project an intriguing next step in her musical career.

“Part of me was concerned that blue will be so different from what my supporters expect that they’ll hate it,” she tells HollywoodLife in an EXCLUSIVE interview. Up until blue, Ariel was known for songs like “Gucci on My Body,” “Wildside,” and “Perf.” Though blue marks a dramatic shift in tone and subject matter, instead of worrying that her fans might not be able to follow along, she decided to embrace her musical truth. “I realize that you can’t live your life worrying about what everyone else thinks about you and trying to pander to what you ‘think’ other people want – especially when you are presenting yourself in an honest, authentic way.”

During her interview with HollywoodLife, Ariel explained how she arrived at this sound – “In a way, the entire EP is about me finding myself” – while also sharing why she thinks GenZ is flocking to the “’realness” of punk and rock, and what’s next for her.

blue kicks off with “charlie,” a song written about a young girl getting ensnared by Charles Manson. It’s an intriguing source of inspiration since it’s been fifty years since he was convicted for the murders – so what drew you to craft this song about “charlie?”

Baby Ariel: In a way, the entire ep is about me finding myself. These last few years have been amazing, but I’ve also realized there have been times where I lost my sense of self. I wrote “charlie” at a time when I was getting out of an unhealthy relationship. I remember getting to a point where I wasn’t even sure if my thoughts were my own anymore. And around that time, I started watching documentaries, and there was one about the Manson Family. I found it so intriguing how this one man was able to so strongly influence his followers that they lost all their sense of self and would do anything for him – even murder – at his direction. I realized that from the perspective of being lost within that relationship, I could almost understand how that might feel. So I wrote “charlie” in a way to get my control back. In the song, the character ends up defying Charles Manson.

The production on “charlie” is appropriately dark and haunting, which might throw some fans for a loop if they were expecting “Gucci on my Body p. 2.” It’s a bold move to introduce this new chapter of your musical journey. Was there a back-and-forth on what song to open blue, or did you know you wanted “charlie” to start things off?

I agree – this is definitely different from “Perf” or “Gucci on My Body!”  I’m such a different person from who I was when those songs were released.  We actually recorded about a dozen songs and then pared it down to the six we felt flowed best together – both in how the music sounded and how they felt tied to that theme of self-discovery.  From there, it just seemed like “charlie” was the right song to start the EP with because from its beginning, it opens the door to the mood of the music and the theme of the EPs lyrics.  And I wanted to take a strong stance from the beginning of the EP that who I am as a person and as an artist has changed so much from my previous releases.

From “charlie,” blue goes into a slowed-down, ethereal rendition of “moves like jagger.” The song suddenly takes on a whole different mood with this version – how did this come about? Were you playing around one day and happen to discover that this song could be secretly terrifying?

[laughs] Yes!  Actually, I was home with my Dad, and we were working on some stuff on the piano.  We sort of accidentally stumbled upon the melody that Adam Levine whistles in the song, except that we played it slowly. I then started singing it in that slow vibe, and it immediately felt haunting – almost terrifying like you described.  The lyrics had this really sinister subtext about control and submission that we never even thought about when listening to the regular version.  So we decided to work on it with that thought in mind.  It felt like the automatic continuation of ‘charlie’ which is why the two songs are placed as if they’re almost one, singular long track.

From there, blue turns cold with “winter.” The lines in the song — “the words you spoke / you know, she stole from me / because she’s real to you / while I’m a memory” – really cut deep, capturing that unreal feeling of being in someone’s past after they moved on. It’s a commendable songwriting moment, and I was curious if that’s one of your favorites on the EP?

Thank you.  I have a hard time picking out specific favorite songs or moments from the EP.  How I feel about the songs and the moments really depends on my feelings and mood at any time. Sometimes I feel really, really close to “heaven.” Other times it’s “winter” or “nothing.”  And often, I almost can’t listen to it because I’m so close to it.

When “winter” starts, it strikes me as the musical cousin to Fever Ray’s “If I Have A Heart.” I was curious if you had any “north stars” – aka artists who not so much directly influenced you to find the sound but helped guide you to it – while making blue?

That’s a really interesting question.  It’s funny because most of the music I regularly listen to is very different from the music I write.  For example, I listen to a lot of Dominic Fike, SZA, and Jorja Smith, who I don’t think make music like blue at all.  For blue, I just pulled from what came from within me.  These were songs written mostly while I sat alone at the piano or with my guitar.  I’d find a melody over a few chords, and from there, we wanted the production to feel as if it was the natural choice for the songs themselves.  I grew up in a world of very diverse musical influences. Everything from Prince to the Beatles to Jane’s Addiction.  So there’s probably some Mazzy Star in there and Cigarettes After Sex.  There’s probably also some Radiohead and Nine Inch Nails.  But none of those artists were on my mind as I wrote or while we produced.  They’re just probably in me.

The song “nothing” picks up the energy a notch while maintaining the vibe – personally, it’s a highlight of blue – in what seems to continue the themes of longing and loss in “winter.” Did you craft blue with a running narrative, a story, in mind?

Actually, I wasn’t conscious at all about a unifying theme while I was writing.  It wasn’t until after when we took a step back that we sensed that there was kind of a story there – almost like a movie about a girl who is lost and has to find herself.  For me, songwriting is a lot like my own personal therapy.  It helps me deal with my feelings and anxieties.  And I think I was going through this transitionary period in my life, and these were the songs that came out of me – songs about finding myself.

Gotta say, the fuzzy electric guitar on “nothing” is brilliant. Which – lately, it seems that the music of your generation is incorporating more punk, alternative, and rock influences. As someone who’s well connected with your fans – and has seen them grow up – why, in your opinion, do you think this sound appeals to GenZ?

I guess it comes from that feeling of ‘realness’ that you get from those genres and with instruments like guitar. There’s just something about the sound and feel of live instruments that resonate.  For so long, so much music has been made on computers with artificial sounds, and in a way, I feel like we’d gotten away from that authentic vibe you get from the sound of people hitting real drums or plucking real guitar strings or touching a real piano.  And I think authenticity resonates with my generation, and music that is made – at least partially – with live instruments just fills this void that had been made solely with computers.  Don’t get me wrong – I couldn’t have made this EP without computers. In fact, the whole thing was recorded on a Macbook during the pandemic!  But we wanted the sound to have that ‘live feel’ along with the computer synths and pads.

Speaking of your connection to your fans, was there any concern that they might be shook by blue? You display a more mature sound – was there a moment when you thought about pulling back? Or did you have faith that your fans would be all aboard with this new direction?

Part of me was concerned that blue will be so different from what my supporters expect that they’ll hate it.  But I realize that you can’t live your life worrying about what everyone else thinks about you and trying to pander to what you ‘think’ other people want – especially when you are presenting yourself in an honest, authentic way. So I had to put that concern down and just let myself be open and honest.  To write and release the music that is truly coming from within me.  Of course, I’d love for my supporters to love it.  But before that, I needed to be authentic and honest.  Hopefully, that honesty will resonate with listeners. 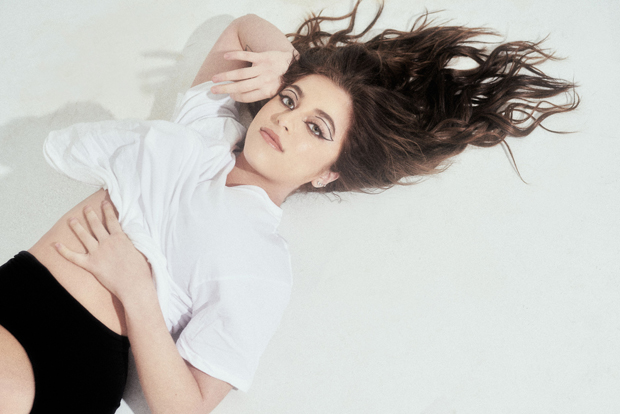 blue closes out with “heaven.” There’s a touch of melancholia to the song, but it isn’t terribly emo. It’s more ‘i’m sad, but i’m strong to deal with it.’ Is that the overall feeling you want blue to convey – or is that off the mark?

Thanks – I think you put that very well. Yes, with “charlie,” the EP starts with a girl who is lost. By the time we get to “heaven,” while there is that sadness to it, she is definitely coming to terms with herself and finding peace. blue expresses sadness and loss.  But I hope listeners walk away with a sense of strength and optimism, and resolve.

blue arrives as we begin the back half of 2021. Do you have any plans for the rest of the year? Tours, performances, or work on a debut album, perhaps?

‘m currently in Toronto shooting Zombies 3 for the Disney Channel, which has been lots of work and lots of fun.  Then in the fall, I’m really excited for the theatrical release of Oracle, a psychological horror movie I’m in with Heather Graham and Ryan Destiny.  I’m really excited for that. I don’t have any current plans for tours or performances yet, but I’m always writing, so a follow-up to blue might not be too far off in the future.  And the one thing I’ve come to realize these last few years:  life and the universe have a very funny way of being unpredictable.  So I’m sure there’s a lot I haven’t even conceived of yet that will fill my plate before the year is up.