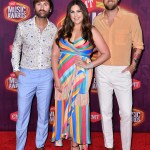 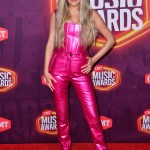 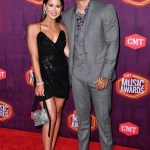 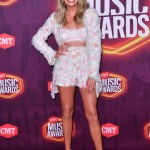 Carrie Underwood brought major star power to the 2021 CMT Awards, and she looked absolutely breathtaking at the show. See her look inside!

As always, Carrie Underwood killed it with her look at the CMT Music Awards on June 9. Carrie always brings her A-game at award shows, and this was no different. The country superstar skipped the red carpet, but looked like a superstar when she took the stage with NeedToBreathe from the Bonnaroo farm. Carrie and the band duetted on their song “I Wanna Remember,” and they absolutely killed it.

For the performance, Carrie wore a white pantsuit, along with a  chunky black belt around her midsection. The belt had a moon engraved into the middle of it, and Carrie completed the look with black shoes to match. Her hair was in simple curls and parted down the middle, while her silver eye makeup went perfectly with the sparkly, celestial look. As always, her powerful voice was her best accessory on stage as she belted out the song.

@carrieunderwood & @NEEDTOBREATHE Did a Great Job Performing “I Wanna Remember” at the #CMTAwards ! #VoteCarrieCMT pic.twitter.com/POICkWmOTS

Carrie has been loyal to the CMT Awards since the very start of her career. At her very first CMT Awards ceremony in 2006, she actually took home two awards — Breakthrough Video of the Year and Female Video of the Year. Since then, she’s won at the show 20 more times, and has been nominated plenty more. Carrie actually has the most wins in CMT Music Awards hisotory!

Although Carrie hasn’t released an album with all original music since 2018’s Cry Pretty, she’s been hard at work in the studio recently. In 2020, she released her first Christmas album called My Gift. She followed it up with a gospel record called My Savior in March 2021. In December of this year, Carrie will begin her Las Vegas residency, in collaboration with Resorts World Las Vegas, as well.