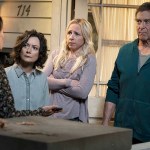 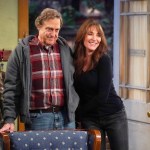 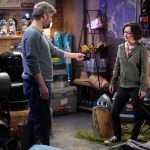 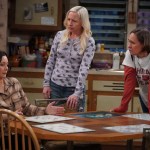 ‘The Conners’ season 3 finale featured many surprises. HL got EXCLUSIVE scoop from the EPs about season 4 plans, including a wedding for Dan and Louise, what’s next for Ben and Darlene post-rejection, and more.

Welcome to the family, Louise! Dan proposed to Louise in The Conners season 3 finale, and now they’re getting hitched. While Dan and Louise were in a celebratory mood, Ben and Darlene were not. Darlene finally decided to take the next step and pop the question to Ben, but he said no.

HollywoodLife spoke EXCLUSIVELY with The Conners executive producers Bruce Helford and Dave Caplan about what’s to come in season 4. This is definitely not the end for Ben, no matter what happens with him and Darlene romantically. The EPs also weighed in on whether Katey Sagal will return in a larger capacity next season in the wake of Rebel’s cancellation, Becky’s future, more Johnny Galecki, and more.

Dan popped the question to Lousie, and now they’re getting married. Will Louise be a bigger part of season 4?
Bruce Helford: This year was tricky because she was doing Rebel. She was graciously working on the weekends for us and doing double duty. It’s really hard to do that, especially since she was the star of her own show. But yes, she is more available until someone else grabs her for another show. She will be more available to us for next season.

Did you know about Rebel’s fate when you wrote the finale? The episode set her up perfectly to come back in a bigger capacity next season.
Dave Caplan: No, we didn’t know about Rebel. We didn’t know about the Rebel finale before writing in the proposal, but Katey [Sagal] fit in so well with us. She fit in with The Conners in such a perfect way. We felt it, and she felt it. She came to us at the end of the season and said, “Don’t you dare write me out of the show whether Rebel goes or not. I will always make time to come back here and do whatever I can do.” She was so adamant about it and so passionate about staying part of The Conners that we were going to make that happen one way or the other and so was she.

Louise and Dan are getting married, while Darlene and Ben are not. He rejected Darlene’s proposal and is still figuring things out. Will you circle back to that in season 4?
Bruce Helford: Ben is a regular on the show, and we have plans for Ben. Ben will definitely be back next season. We won’t say much more.

Dave Caplan: But we have to say that Ben and Darlene’s lives are intertwined at this point. Dan is working at Ben’s hardware store. He’s kind of ingratiated into the family regardless of what happens with him and Darlene. Whatever happens with them, there’s going to be no escaping each other.

Everyone’s been talking about the Aaron Rodgers cameo. How did that come about?
Bruce Helford: Originally, Tom Werner came to us and said he thought it’d be great if Jackie went on Jeopardy because she’s always got these little bits of trivia information that she’s imparted to the family. We contacted Jeopardy and they said “great.” At that point, Alex [Trebek] was still with us, and Alex agreed. He thought that would be great to have her on the show. So then the pandemic hit, and then things got worse for Alex. Unfortunately, he passed. And we still loved the idea of being on Jeopardy. We love Jeopardy. Even in honor of Alex, we’d love to continue doing this. They said, “Give us a little bit of time. We’re going through a difficult period here.” We understood that. When Aaron Rodgers signed out to be the host, they thought this would be a great time to do it. We were going like, yes, the Packers are the enemies of the Bears. The Bears are Chicago’s favorite team. They’re based in Chicago, so that’ll be fun. It was really wonderful going there and doing that.

Geena returned and now she’s retiring. Will she have more a presence in season 4?
Dave Caplan: We love Maya Lynne Robinson. We didn’t know the fate of The Unicorn. It was kind of a similar thing to Katey and Rebel. But even before we knew the fate, we said we should get her back and try to deepen that story of her being overseas and serving in active duty with DJ having to pick up the slack with Mary. We just kind of felt it was hanging and needed some closure. We didn’t know what the fate of The Unicorn was, of course. We were pulling for it because we love Maya Lynne, but now this opens things up for us to tell more of those stories and kind of look into a little bit more about what it’s like in a veteran family and what the balance of power is between who stayed and who went and all that kind of stuff. It’s great for us. We feel badly that Unicorn didn’t go, but we’re super happy to have Maya Lynne.
Bruce Helford: It’s also interesting to see what an in-law of the Conners has to deal with. She’s equally up to the challenge, so we’re going to think more fun of what it’s like to be a Conners in law.

There were so many amazing guest stars this season. Are there any that are still on your bucket list?
Bruce Helford: There’s a million of them. Also, we’re hoping that Candice [Bergen] will come back. She was wonderful in the group because in real life she’s just such a natural, down-to-earth person. It was just great having her there. There are lots of people that we would love to have on, and the lovely thing is that everybody loves to come play with Sara, Lecy, John, and Laurie. We’re very fortunate that our guest stars are usually anxious to come and join us and have fun on the show. I was really proud that we had Candice on for one guest spot to start with, and she came to us and said, “I’m really impressed by the writing. I really love this, and I’ll do it again.” We were like, “Whoa, okay, great.” And then we had her on two more times, and she really fits our bill. She really fits in with us, and she really likes what she’s doing. That’s a big gift to us, and that makes me feel very proud.

I spoke with Lecy earlier in the season about Becky’s relapse. It was such a strong storyline for her. What are your plans for Becky in season 4? By the end of the season, she was in a better place.
Bruce Helford: She was kind of pushing her sobriety on everybody. That’s where we kind of left her with that. But there are lots of loose ends for her because she’s trying to adopt a life where she does not stress and overwhelm herself, and that was helped by the fact that The Lunchbox is doing better, thanks to Jackie’s ingenuity and the offer by Neville to put more money into The Lunchbox to make it more of Bears sports bar. She’s got that coming up. She’s got her baby. Emilio has to be dealt with. He was just in a support mode at the end of the season because he was helping take care of the baby while she was off in rehab. That relationship has places to go, so there’s a lot for her coming up.

Dave Caplan: In some ways, Becky’s struggles with her addiction kind of had echoes of what everybody was going through during COVID. A lot of people were struggling with their mental health. It made a lot of sense to us. Now that we’re sort of coming out of that, it feels appropriate that Becky’s got some glimmers of hope for a better, more optimistic life to lead even through the struggles. She seems like she’s on a good path.

It’s been a while since you Johnny Galecki’s David Harris was on the show. Have you spoken to him? Do you want to bring David back again down the road?
Bruce Helford: He knows that he’s always welcome. He’s got so much going on in his life. He’s producing shows, got a kid. We’re in touch. We all love each other very much. We’ve known each other. I worked with Johnny since he was 15 years old so we have a great relationship there. Because he’s so busy, it’s been very tricky to say that he wanted to be back in their lives, and then all of a sudden he’s not. We allude to it once in a while that he’s kind of helping but not helping as much as he should in Darlene’s life. But he knows the door’s always open for Johnny to come and play. It’s a matter of his schedule.

The Conners has brought back a number of familiar faces over the last 3 seasons. Molly’s return was a big one for fans. Are you planning to continue bringing back old characters into the fold more?
Bruce Helford: It’s incredible to have the luxury of the wealth of 30 years of a show, so we can go and bring people back. Molly was during season 5 when I was running the show back in the day on Roseanne. And I was shocked that everybody was like, “Oh my god. They’re bringing Molly back.” She was in like three episodes. People remember the characters so vividly. We had a big audience at the time. It’s wonderful for us. It’s wonderful for the audience out there. We’ll definitely be going back to that. The offer is always open to George Clooney whenever he feels like he needs a boost in his career.

At the end of the finale, there’s talk of Louise and Dan eloping. Would you consider an actual wedding in season 4?
Bruce Helford: They’re not going to elope. We’ll say that much for sure. We’re moving sort of in that direction.