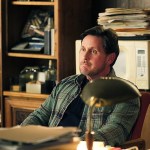 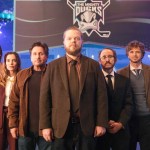 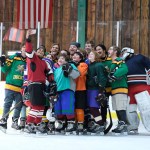 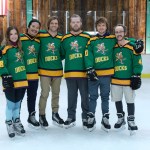 The Don’t Bothers are headed to States! Gordon Bombay addresses the team before they get on the road in this EXCLUSIVE preview of the May 21 episode of ‘The Mighty Ducks: Game Changers.’

It’s all been leading up to this, Mighty Ducks fans! The Don’t Bothers have made it all the way to States, and they’re kicking off their road trip in this EXCLUSIVE preview of episode 9 of The Mighty Ducks: Game Changers. Gordon Bombay steps onto the bus to speak to the team before they get on the road.

“I’m sure you’ve all heard. I’ll be in charge on this trip,” Gordon tells the kids. That piques Nick’s interest. “So we get to run around and push all the elevator buttons and wear the shower cap?” He later adds, “It’s my first time at a hotel without my mom. I’m going to live it up.”

Gordon doesn’t care for the nonsense. “Just be safe. I’m not interested in how many of you can fit into an ice machine,” he says. He also tells the team that there’s a party tonight, and their first game is tomorrow.

Before he settles into the bus driver’s seat, he makes sure to tell the team, “Oh, and one more thing. We’re going to States.” That has the entire team cheering. Gordon has been hesitant this whole season about getting back into coaching, but he’s finally back where he belongs. He always comes in clutch when we need him. The Don’t Bothers will face their toughest competition yet at the State Championships. Will Gordon lead the Don’t Bothers to a state championship? Time will tell!

Episode 9 of the Disney+ series, which is based on the beloved Mighty Ducks films, is titled “Head Games.” This is the last episode before the season finale, which will air on May 28. The show stars Emilio Estevez, Lauren Graham, Brady Noon, Maxwell Simkins, Swayam Bhatia, and more. New episodes of The Mighty Ducks: Game Changers premiere Fridays on Disney+.