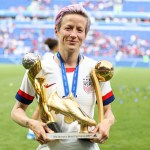 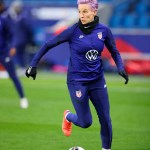 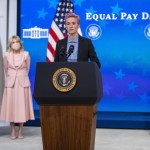 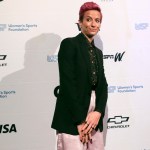 USWNT icon Megan Rapinoe shared how fighting for equal pay is more than just making sure women get paid better.

With the chants of “Equal Pay” echoing through New York City as the US Women’s National Team celebrated their 2019 World Cup, Megan Rapinoe thought that US Soccer would finally relent and pay the women what they’re worth. “I really did, to be honest,” she said in a profile in Harper’s Bazaar. However, the soccer organization fought back in ways that were “cartoonishly misogynistic,” per Harper’s. That only emboldened Megan, 35, and the rest of the team, and she explained how this fight is more than just about bank accounts: it’s about perception. Money is the way our society shows people, especially in sports, how we value them,” she said.

“We know exactly what’s in a contract every time a man signs it,” she tells Harper’s Bazaar. “We never know what women make. Why is it? Because they’re not something to be proud of. We need to change that narrative.” The USWNT is hopeful about negotiating a new fair collective bargaining agreement before the current one expires by the end of the year, per Harper’s, but the issue of back pay is still in question. U.S. Soccer claims it would bankrupt them to pay the team, but Megan doesn’t care. “I’m sorry that you practiced gender discrimination and didn’t budget that in,” she said. “But they’re going to need to reallocate.”

U.S. Soccer was forced to recalibrate in March 2020 after the federation used sexist and demeaning language in a legal filing against the U.S. women’s lawsuit over equal pay. The organization argued that there was “indisputable ‘science’” that women lacked the “skill” of male players, and that “the job of a MNT player carries more responsibility within U.S. Soccer than the job of a WNT player, from an [Equal Pay Act] standpoint.” This flew in the face of how the women’s team have brought home four FIFA World Cups while the men’s squad failed to qualify for the 2018 tournament (and that the Under-23 US Men’s National team failed to qualify for the upcoming Olympics.)

Megan’s commitments to social justice and equality have paid off in more ways than one. She and her fiancée, 4-time WNBA Champion Sue Bird, met at the 2016 Rio Olympics. Megan “originally slid into Bird’s DM’s to ask about the WNBA’s activism,” according to Harper’s Bazaar. At the time, Megan was catching heat for her decision to kneel during the national anthem before games, a move done in solidarity with Colin Kaepernick’s campaign to protest the killing of Black people by the police. Megan’s first protest was at one of Bird’s WNBA games, where she stayed seated during the national anthem. Sue was the only one that noticed.

The two became engaged in October 2020. That year, Megan sat out of the OL Reign’s season out of concerns for COVID and instead, accompanied Sue inside the WNBA bubble (the “Wubble”) in Florida. She spent the year supporting Sue and the Seattle Storm’s run to another WBNA title, Sue’s fourth overall. With the postponed Olympics on the horizon – it’ll be the last for Sue, who is 40, and possibly the last for Megan – both Bird and Rapinoe are focused on the future challenges – as well as a weeklong wedding in a warm locale to spend time with their families.