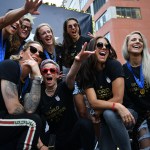 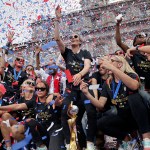 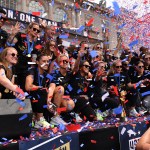 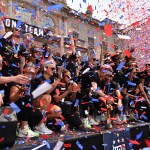 It wouldn’t be a parade in New York City without an F-bomb, right?. Amidst her World Cup celebration in the Big Apple, Megan Rapinoe let the curse word fly on live TV!

Is Megan Rapinoe an official New Yorker, now? The 34-year-old California native spoke as if she was born and raised in Brooklyn during the July 10 celebration in New York City. Megan and the rest of the United States Women’s National Team were in town to celebrate their FIFA World Cup victory. After the parade made its way up the “Canyon of Heroes” to the steps of City Hall, Megan was given the mic. After she gave a rousing speech that encouraged everyone to “love each other” more and hate each other less, she gave a little love to the Big Apple. “New York City, you’re the mother*cking best!”

The vulgarity won over the hearts of many fans watching and many hoped that she would run for president. The United States’ team went “viral” for their celebrations throughout the 2019 World Cup, mainly because everyone except the USA hated them. During the USWNT’s 13-0 route of Thailand in their group play opening match, the USA was criticized for celebrating too much, per Today. “0.0 problem with the score line as this is THE tournament BUT celebrating goals (like #9) leaves a sour taste in my mouth like many of you,” Taylor Twellman, former U.S. men’s national team member tweeted. “Curious to see if anyone apologizes for this postgame.” Curiously absent from Taylor’s tweet is the admission the acknowledgment that the USMNT has failed to bring home a World Cup (and they didn’t even qualify for the 2018 tournament) while the women have won four.

The criticism didn’t dull the Americans’ spirits or celebrations. During the quarter-final against France, Megan debuted a new celebratory pose after scoring on a free-kick. The US superstar ran to the sidelines and outstretched her arms, allowing her to bathe in the admiration from her supporters (and in the saltiness from her detractors.) Alex Morgan did Megan one better in the semis. After scoring against England, Alex mimed as if she were taking a long sip of tea – pinky outstretched – as a way to troll all the fans, particularly the Brits, who were mad at her win. When asked about criticism that Alex Morgan’s tea-sipping was distasteful, Megan shrugged. “Wah, wah, wah. It’s like, we’re at the World Cup. What do you want us to do?” she said, according to sports reporter Rachel Bachman. “We work hard, we like to play hard.

This is one of my favorite sports pictures of this decade. Thanks for being such an inspiration to my daughter @mPinoe – you were unbelievable today. pic.twitter.com/iMI9TGb1PT

Speaking of “playing hard” after “working hard,” the lasting image of the 2015 World Cup victory was not of a goal or a save, but of a kiss. After the Americans defeated Japan in the final, Abby Wambach rushed to the stands to find her wife, Sarah Huffman. In front of the 50,000-plus fans in attendance at the BC Palace Stadium in Vancouver, Canada, Abby planted a passionate kiss on the lips of her love. This powerful image of love would become a capstone on her legacy because Abby would announce her retirement two months later.