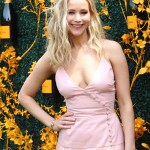 Jennifer Lawrence was spotted enjoying a solo shopping trip in the Big Apple while looking stylish in an all-black ensemble and black patent leather shoes.

Jennifer Lawrence, 30, looked comfortable while wearing a flattering outfit during her latest outing in New York City on May 7. The actress was doing a little shopping while showing off a long black coat over a black top, black pants, and black patent leather oxford style shoes with laces. She also wore a black face mask as her long blonde hair hung down over her shoulders.

She held a white bag and had a brown purse with a long strap over her shoulder as she took in the sights of the city during her stroll. Her coat also helped her to stay warm as the temperature at the time was around 50 degrees.

Jennifer’s latest solo outing comes after she was photographed while out and about with her husband Cooke Maroney, 36, on Apr. 17. It was the first time the lovebirds were spotted together for six months and they appeared relaxed while enjoying dinner together at an NYC restaurant. They also expressed a bit of PDA as Cooke put his arm around his wife’s shoulder.

When Jennifer’s not spending quality time alone of with her hubby, she’s hard at work with her successful career. The talented star just finished filming the upcoming film Don’t Look Up, which co-stars Leonardo DiCaprio, Cate Blanchett, Meryl Streep, and Timothee Chalamet. In the feature, which is directed by Oscar-winning writer Adam McKay, she shows off a bright red hair color and was spotted walking alongside Leo on a ship and kissing Timothee in two different scenes she filmed.

The highly anticipated movie follows two astronomers trying to warn the people of Earth that a meteorite is en route to destroy the planet in six months. Although it’s sure to be an epic one, it didn’t come without its dangers. Jennifer made headlines when she was involved in an accident on-set that caused glass to get in her face. The incident happened during an explosion that had gone wrong during production in Boston, MA in Feb., but luckily she recovered enough to continue filming soon after.