Sam Asghari has been spotted working out in Hawaii, without his girlfriend of nearly four years, Britney Spears. The 27-year-old personal trainer was snapped going for a shirtless run on May 5 while vacationing on the island of Maui. He wore blue shorts for the workout and carried a grey shirt in his hand, which matched his grey and white sneakers. The Iranian-born hunk also carried a water bottle as he sported his signature beard and had a serious expression on his face.

While it’s not known whether the “Toxic” hitmaker joined him for the tropical getaway, she recently referenced his fit physique in an Instagram video. Brit shared a TikTok-style clip of herself in late April, showcasing her toned figure in a series of colorful bikinis. In her lengthy caption she wrote, “In the past two weeks I’ve said that’s it … I have got to get in shape considering my boyfriend’s body is hotter than hot!!!!”

She added, “I was like S*** where the hell am I supposed to start… so I run a lot and try to eat clean and be mindful with my food unless I cheat, like last night when I ate a container of peanuts!!!! And then it hit me … I might look better but I felt too vulnerable in my skin being this small!!!! I didn’t like it so I started boxing so now I feel stronger too!!!!” Meanwhile a source told HollywoodLife exclusively that Sam was “very proud” of Brit “deciding that she wants to talk about her conservatorship in court.” 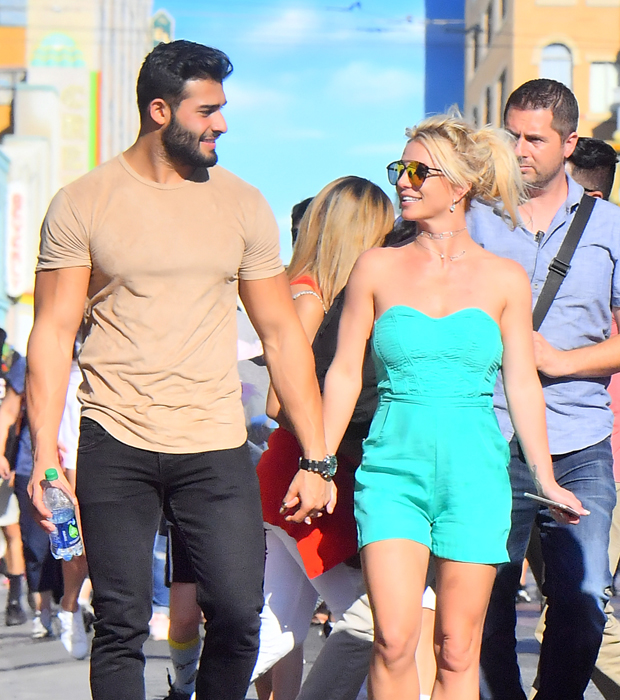 Los Angeles Superior Court Judge Brenda Penny scheduled a hearing for June 23, in which Britney will take the stand for the first time in two years to talk about her controversial conservatorship. It has been stated in court that Britney wants to remove her father, Jamie Spears, from the conservatorship — which is currently being co-managed by him and the Bessemer Trust Co. — and the insider told HL that Sam couldn’t be more supportive. “[He] is impressed that she is taking the initiative to control her life the way she wants it to be run and he is supporting her in any way she needs,” the source dished.