Life is littered with those moments when we regret not having the right words at the right moment. In “whole foods parking lot,” Hannah Hausman takes us along on such a journey, one that’s dotted with Polaroids and brokenhearted memories. At the start of the video, premiering here on HollywoodLife, Hannah is safe in her bedroom but lost in thought. She relives a moment when she bumped into her ex – shaggy-haired, with Sid Vicious padlock necklace and Slayer t-shirt – and how she froze. “Saw you in the whole foods parking lot / Didn’t know what to say / Cause my heart stopped / When I saw that black Dodge charger / With a dent in the back left corner,” she sings. As she wanders through the past, she finds what she’s looking for – the strength to finally let go.

“When I moved into my new house six months ago, I found a bunch of Polaroids that my ex and I had taken during our relationship,” Hannah shares with HollywoodLife. “I thought it would be kind of funny, dramatic, and symbolic to save them and burn them in a music video at some point, and I felt like this was the perfect song for it. We based the whole storyline of the video around the Polaroid concept. The video starts in my actual room where I’m flipping through this book of Polaroids we took during our relationship.”

The specific and powerful imagery in the lyrics comes from Hannah’s own life. “Whole Foods Parking Lot” comes from when she literally saw her ex outside the grocery store. “When it happened in real life, we were both in our cars, hence the line about the black Dodge Charger,” she shares. “I was so scared and caught off guard that I froze and didn’t say anything at all.  The relationship ended really badly and abruptly. I never gave him any closure or received any for myself. I’ve always been a lot better at explaining my thoughts and emotions through music and writing. Both this song and video serve as my attempt at closure, not only for the person it’s about but for myself as well. Together, they are everything I wanted to say when I saw him but didn’t have the words to express.”

Hannah – a Tennessee native, now based out of Los Angeles – also revealed the nature behind the words that appear at the end of the video. “Even after writing the song and making the video, I still felt like a piece of the message was missing, so I added a poem I wrote about him that flashes quickly at the end of the video. I actually wrote it the night before I saw him and edited it in my notes just a few hours before. The final words of the poem are ‘sometimes I wanna talk it over / turn around and give you closure / but I know that we would always end in flames.’” 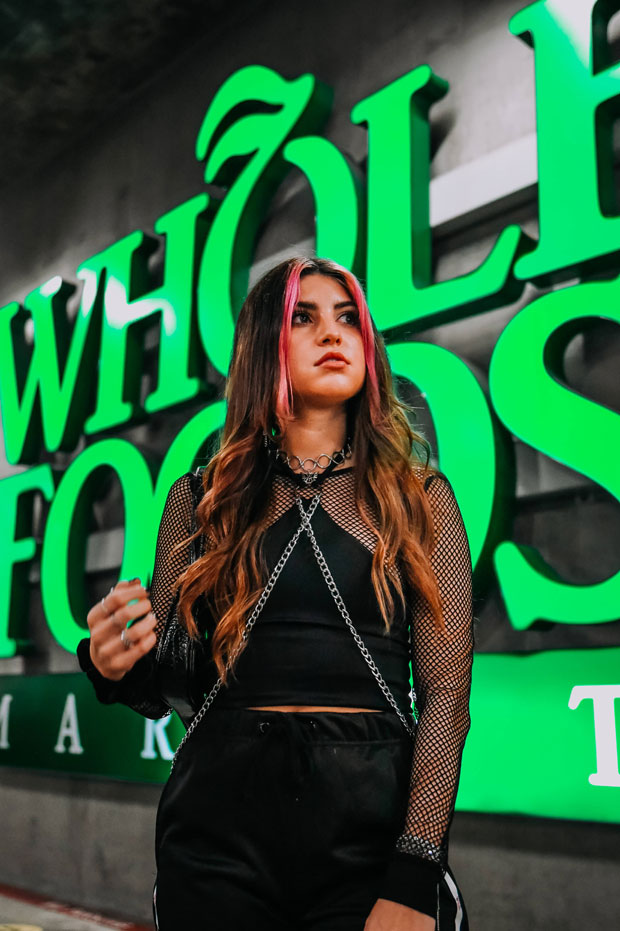 It’s such a powerful statement from someone who, ironically, once lost her to a (pre-COVID) virus. Since working to regain her ability to speak and sing – Hannah has doubled down on her dream. 2020 saw a slew of songs from this rising music star. So far, she doesn’t show signs of slowing down. “whole foods parking lot” is her second single of 2021, following “will i ever feel like this again,” another slice of dreamy pop that showcases her intoxicating vocals and enchanting song-stylings.

Related: ‘Yellowjackets’ Season 2: Lauren Ambrose Cast As Adult Van & Everything Else To Know

Yet, it’s the honesty – and the bravery to be so vulnerable in her songs – that makes Hannah one to watch. On “whole foods parking lot,” Hannah reveals how the song helped her realize how she and her ex were “always meant to fall back to being strangers.”

“I was able to let go because I realized the story would always end the same, no matter what,” she adds. “I am naturally very forgiving, and this was the first time I’ve ever had to completely cut someone out of my life to this extent. It was so difficult for me to do that, but I’ve come a long way, and I’m really proud of myself for maintaining it. Sometimes a person is only meant to play a main role in your life for a season, and that’s okay.”