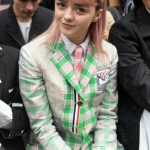 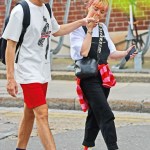 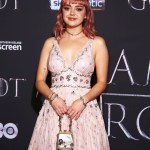 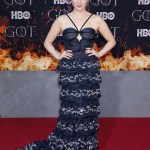 Maisie Williams was photographed for the first time on the set of the Danny Boyle series ‘Pistol,’ which is based on the Sex Pistols.

Maisie Williams, 23, is looking quite different in her latest role than she did as Arya Stark in Game of Thrones! The talented actress was recently spotted in character as the punk icon Jordan on the London set of the upcoming drama series, Pistol, and turned heads with her outfit. She wore a sheer neon green PVC coat along with black bottoms and black tights that went up to her thighs.

She also had on white pointy zip-up heels that went up to her ankles and flaunted a bleached bouffant hairstyle that stuck straight up. She topped the look with some wild makeup that included thick black eye makeup that spread across the outer side of each eye and bright red lipstick. Here eyebrows were also bleached.

Maisie’s part of Jordan, whose real name is Pamela Rooke, looks on point. Her character, who is now 65, was part of the Bromley Contingen of punks who followed the Pistols in the 1970s when she was in her 20s. She also played the lead role in Derek Jarman‘s film Jubilee in 1978 and the set of Pistol was turned into the 1970s King’s Road, Chelsea to make it look even more realistic when Maisie and the other cast members act in their punk-themed scenes in the series, which is set to be released next year.

The highly anticipated drama, which is directed by Danny Boyle, is based on the Sex Pistols‘ rise to fame in the 1970s. Johnny Rotten, Steve Jones, Glen Matlock, Paul Cook and Sid Vicious made quite an impact in the music industry even though their initial career only lasted two and a half years, and in addition to Maisie, other impressive actors such as Anson Boone and Louis Partridge, are set to act in the series.

Maisie’s role as Jordan comes after she finished her iconic part on the highly successful series Game of Thrones. She was on the groundbreaking show from 2011 until 2019 and set her stage as a gifted and versatile actress.