Winter has arrived in Westeros, with a heavy forecast of spoilers! Ahead of the ‘Game of Thrones’ finale, Sophie Turner might have revealed a major revelation about a potential new addition to House Stark.

First and foremost: POSSIBLE SPOILER ALERT. If fans want to go into the Game Of Thrones season 7 finale without any surprises ruined, they better stop reading now. If they don’t, they might discover that Sansa Stark is possibly pregnant! Sophie Turner, 21, may have accidentally let this cat (or in this case, direwolf, dragon or three-eyed raven?) out of the bag with a behind-the-scenes pic, shared to her Instagram on Aug. 26. The Sansa Stark actress posed next to sister Arya (aka Maisie Williams, 20), with both looking pretty badass.

“In hnour of the Throne finals out tomorrow night, and of 6 [million] followers on Instaaaa… here’s da reel roadmans of westeros,” Sophie said. The two were rocking their traditional Winterfell garb while posing like tougher-than-leather gangstas. As Sophie grabbed her crotch, fans were more focused on not her lewd gesture, but at what appeared to be a possible baby bump. This set off a firestorm in the comment section, with fans speculating whether or not Sansa was carrying House Stark’s newest member.

“I don’t know what’s up but I can take a guess that [Sansa] might be pregnant,” one user wrote. “No, they can’t end it with her being pregnant.” “I call it. She’s pregnant with Ramsey’s baby.” “She [better] not be pregnant with [Ramsay Bolton’s] baby.” Of course, not everyone was talking about whether or not Sansa was adventuring for two. “Stark girls ‘bout to drop the hottest mixtape of 2017,” one other fan wrote. So, either Sansa is about to give birth or she and Arya are about to bring hip-hop to this fantasy world. Or both? 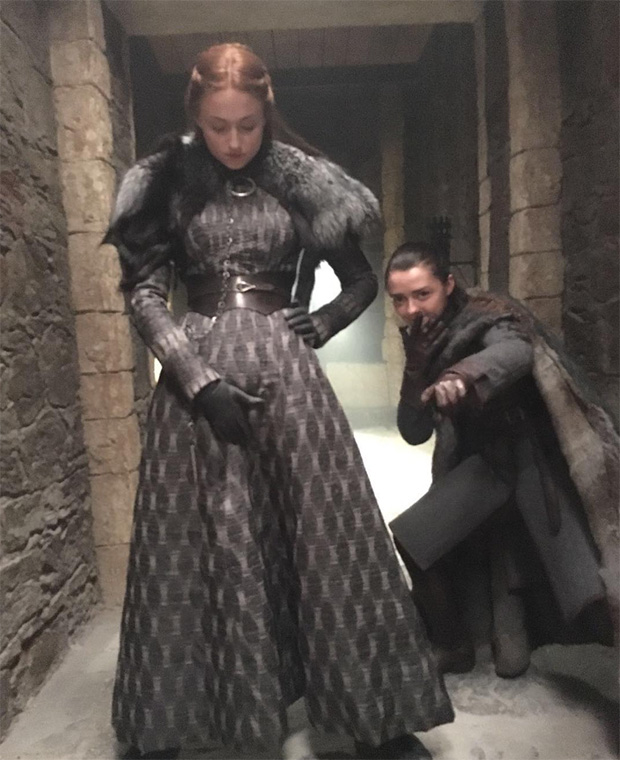 Maisie and Sophie might have the swagger down, but can they spit rhymes hotter than dragon fire? Well…maybe? The two of them did seem like they were having a fun time while on Carpool Karaoke. Both Sophie and Maisie belted out an enthusiastic version of Justin Bieber’s “Sorry” and “Wrecking Ball” by Miley Cyrus. Maybe they can form Westeros’ first pop group? That’s assuming they both survive the Season 7 finale. So, is Sansa pregnant? Will Arya turn out to be the Seven Kingdom’s version of Taylor Swift? Fans better tune into HBO on Aug. 27 to find out.

What do you think, HollywoodLifers? Do you think Sansa’s pregnant? Or was it just a trick of the light with Sophie’s costume?