Justin Bieber has come a long way from his immature antics. A clean-shaven Justin, 27, was the living definition of chivalry on Thursday (Mar. 25) when he and wife, Hailey Bieber (née Baldwin), arrived at The Nice Guy in Los Angeles. The couple arrived via a private coach, and Hailey, 24, needed some assistance with the steep step down. The model had donned a pair of precarious pumps, and with her leather mini-skirt (and a Citrus Orange Kaze Origins face mask), she probably didn’t want to risk a wardrobe malfunction. Ender her “knight in shining armor” – or, in this case, a denim jacket and loose-fitting slacks.

With his hand outstretched, Justin assisted Hailey down to street-level, and the couple headed in. Hailey and Justin weren’t just catching a bite to eat. The L.A. hotspot was hosting a post-launch celebration for Justin’s new album, Justice. Justin’s friends (and former flings?) Kendall Jenner and Kylie Jenner arrived at the event, with Kylie, 23, rocking a sheer red jumpsuit. Red, of course, was the color-scheme of Justin’s previous album, Changes (whereas Justice is green), but Ky does what Ky wants. 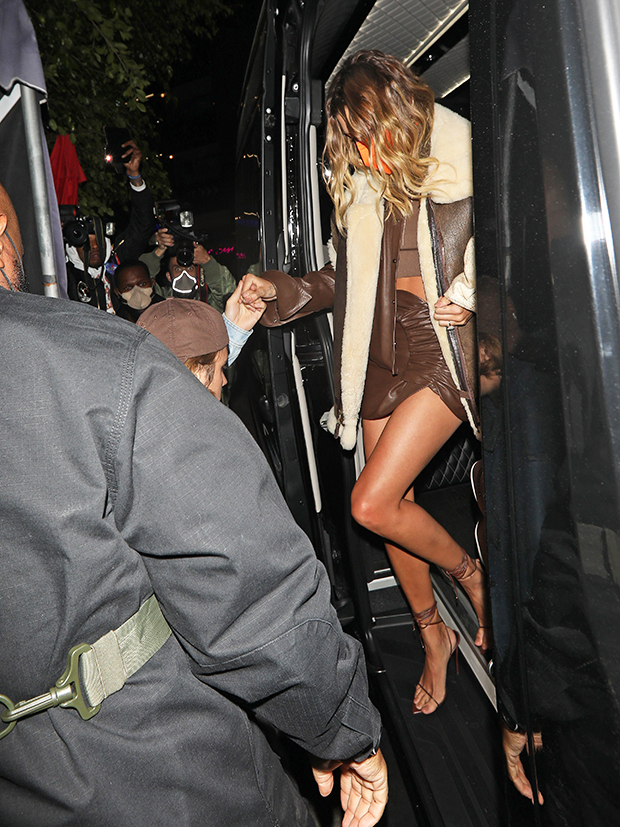 Justice came out on March 19. Reviews have been mixed. “Bieber appears to have rediscovered his mojo, resulting in one of his most focused projects to date,” said NME, while Consequence of Sound called it a “mix of hollow, horny jams and social justice messaging.” That latter element, the “social justice messaging,” came in the form of liberal use of clips of Martin Luther King Jr.’s speeches. There’s even an “MLK Interlude” that’s 1:44 long. While some critics were perplexed why MLK was on a Justin Bieber album, the civil rights leader’s daughter, Bernice King, seemingly gave her blessing for Justin to use the audio.

“Each of us, including artists and entertainers, can do something,” she tweeted on Mar. 18, a day before the album’s release (while also sharing that he’s donating to a string of civil rights organizations. “Thank you, @justinbieber, for your support, in honor of #Justice, of @TheKingCenter’s work, and of our #BeLove campaign, which is a part of our global movement for justice. #MLK #EndRacism.”

If Justin was bothered by the backlash or the middling reviews to his new album, he didn’t look like it when he went to Turk’s & Caicos on Mar. 21. Justin and Hailey were spotted swimming during their short holiday. During a break on the sand, Justin snuck in a quick smooch. Afterward, they exited the beach while walking hand in hand.