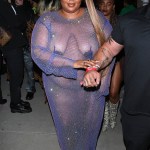 Lizzo used a hot clip to reveal her relationship status, after PDA photos with a mystery man sparked romance rumors.

Lizzo is making her relationship status clear: she’s “SINGLE,” all caps! This is what the 32-year-old singer declared underneath a playful video that she posted to Instagram on March 23. In the sultry clip, the “Truth Hurts” singer posed in a black lingerie set featuring a mesh thong and sporty triangle bralette, which ended with a sultry butt smack.

Lizzo’s relationship status reveal comes a day after photos of the Grammy-winning artist with a mystery man surfaced. They were quite intimate shots [SEEN HERE]: Lizzo was pictured with her arm sweetly wrapped around the back of her unidentified friend while standing on a balcony in Malibu. At one point, the mystery person leaned in to kiss Lizzo.

Despite the PDA in the photos, Lizzo has made it clear that she’s enjoying life solo at the moment. The “Good as Hell” singer certainly doesn’t need a lover to have fun; on March 20, Lizzo and her friends had a blast on a yacht in Los Angeles.

That doesn’t mean Lizzo’s closed off to potential suitors, though. Amid this past weekend’s yachting trip, she had a sexy photo shoot in her metallic blue bikini and snake print coverup and posted the photos with a special request underneath. “ITS SHOOT YO SHOT SATURDAYS ALL BUCKETS NO MISSES // ENTER THE DMs AT UR OWN RISK,” Lizzo cheekily captioned the bikini photos on Instagram.

Lizzo also recently attended the 2021 Grammy Awards that took place in Los Angeles on March 14, where she presented the award for Best New Artist (a category that she herself was nominated for in 2020). This meant Lizzo could have a friendly reunion with one of her celebrity pals: Harry Styles! Lizzo and the One Direction alum posed for iconic photos backstage, and Lizzo’s metallic pink dress from Balmain complemented the Y2K vibes of Harry’s yellow plaid blazer from Gucci. Who needs a significant other when you’ve got access to a yacht and are friends with Harry Styles?