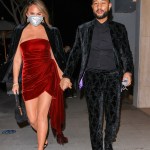 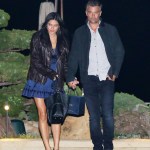 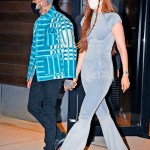 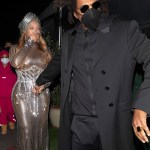 Dolph Lundgren looked so in love with his 24-year-old fiancee, Emma Krokdal, while out and about on March 22.

Love is in the air for Dolph Lundgren, 63, and Emma Krokdal, 24! The two were spotted out and about in West Hollywood on March 22, and they didn’t shy away from packing on the PDA. The Swedish actor and his fiancee pulled down their face masks to share a kiss, as paparazzi cameras flashed away from nearby. Both Dolph and Emma wore athelisure-wear for their casual outing.

Emma and Dolph went public with their relationship in January 2020, and got engaged in June. Dolph announced the engagement on June 16 on Instagram by posting a photo of himself alongside Emma, who was holding up her left hand to show off her ring. “Something every special happened here in Sweden,” he captioned the pic. Emma uploaded the same picture with the caption, “Pinch me.”

Despite a nearly 40-year age difference, Dolph and Emma, who works as a personal trainer, certainly seem madly in love. This will not be the action star’s first marriage, though. He was married to Anette Qviberg from 1994 until 2011, and they have two daughters together. Dolph’s oldest daughter, Ida, is 24 — yes, the same age as his fiancee — and his youngest, Greta, is 19. Dolph was also in a long term relationship with Jenny Sandersson from 2011 until 2017, as well.

Emma and Dolph met at the gym and were first linked in 2019. However, they didn’t make their first public appearance as a couple until the Dominican Republic Film Festival in Jan. 2020. “I’m very lucky to have someone like Emma at this age,” Dolph admitted in a 2020 interview. “It changed my life.” He also revealed that he and Emma “train” each other in the gym, and said that he considers them a “perfect match.”

At the end of 2020, the two even expanded their brood by getting a cat together! They posted with their furry new friend on social media to announce the addition.