Can you ever just be whelmed? #tellmewithouttellingme #10thingsihateaboutyou #yourturn

“I know you can be overwhelmed, and you can be underwhelmed, but can you ever just be whelmed?” she quipped. In the film, which was released at the turn of the century, Gabrielle played Bianca Stratford, the best friend of Larisa Oleynik‘s character Chastity. Gabby then replied to Zaya, in character, “I think you can in Europe.” Fans couldn’t get enough of the funny video, with many commenting on Zaya’s fashionable look, which included a green pantsuit, purple sweater and red braids.

“Zaya is stunning,” one fan wrote, while another commented, “Zaya wakes up every day and chooses to serve, and I’m here for it.” The teen, who is the daughter of basketball star Dwyane Wade, has become an icon in the LGBTQ+ community after she came out as transgender last year. Her stepmom Gabby opened up in July 2020 on the podcast Jemele Hill is Unbothered, to discuss how she encourages Zaya to live her most authentic life. “We are losing our Black and brown trans sisters at an alarming and frightening rate and, if we’re not doing everything in our power to get it right, we’re sacrificing more of us,” Gabrielle began. 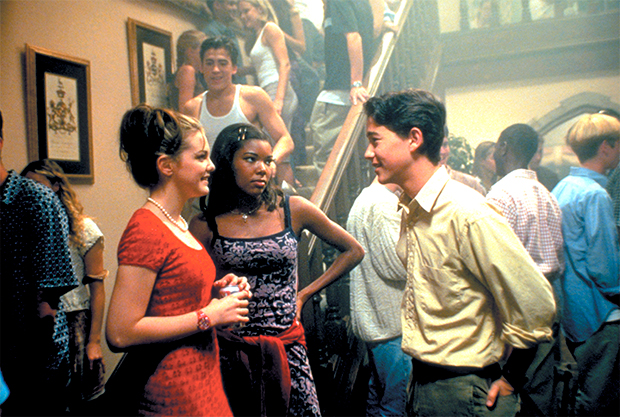 “I’ve literally been called a witch and I’m like, what the f***? Because there’s this notion that we can’t all exist as we are and for anyone of us to exist in any kind of different sort of way in all of our beauty and splendor and wonderful selves we should cast them out. “We all had to educate ourselves because we weren’t. We didn’t understand the trauma and the harm that’s caused by misgendering someone.”