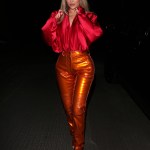 Kylie Jenner stunned her fans with a sexy, monochromatic look. The Lip Kit mogul took to Instagram to show off her latest impromptu photo shoot and wowed her followers with her ensemble! Check it out!

Kylie Jenner was absolutely serving looks on February 23. The stunning mogul, 23, took to Instagram and shared a series of photos from an impromptu photo shoot, featuring the star in a sexy, monochromatic gray number. In the photos, Kylie posed up against an exterior wall and modeled her sexy little number, showing off the cutouts that were featured around her shoulders and torso.

Kylie even highlighted her strong core with a closeup of her abs. The Keeping Up With The Kardashians star’s long, raven black hair simply cascaded down her shoulders and past her waist. The entire look was topped off with a pair of ultra sassy, strappy high heels. It was clear that Kylie was totally feeling herself, and she let her fans know in the caption to her post!

“Less is more,” she wrote, along with a white heart emoji. Fans were absolutely obsessed with Kylie’s look, including her famous sisters! “OMG what’s happening,” big sis Khloe Kardashian wrote in the comment section of the post. Kim Kardashian left a series of fire emojis for Kylie to find, too! More of Kylie’s fans fawned over the starlet’s outfit, but the color coordination of her ensemble might have just been inspired by her new little friend.

On February 22, Kylie seemingly revealed that she’d adopted a little pooch named Kevin! Kylie shared a few snaps of the sweet looking pup in a series of photos on Instagram, adding the caption “Kevin” along with a heart emoji. Kylie even captured the pup in a series of her Instagram Story posts. “Kevin! Kev! You are so cute! Kevin! He’s just looking at my slippers,” Kylie said during her stories.

Regardless of where her inspiration came from, Kylie seriously served up yet another hot look for her more than 215 million followers to check out! The starlet has truly been glowing and thriving and her style just keeps getting better. We cannot wait to see what she shares next!