Sam Asghari gave girlfriend Britney Spears a lift — literally — as he carried her on his back during a long outdoor hike. Brit laughed as she exclaimed she felt like she was riding ‘a horse.’

Britney Spears got out of the house for a gorgeous bluebird day hike on Feb. 18. She and longtime boyfriend Sam Asghari hit the trails near her Thousand Oaks home, but the pop princess wasn’t in the mood for a workout. Britney enjoyed the company of her sweetheart and the sunshine thanks to him literally carrying her on his back in a fun new Instagram video that both Britney and Sam shared on their respective Instagram accounts.

“I’m sorry I’m making you do this. I just don’t feel like walking right now,” Britney joked to Sam as she had her arms holding on around him from the back. She wore a white t-shirt and black Adidas track pants with the iconic three white stripes down the side. Britney seemed like she was game for hiking, as she had a pair of trainers on her feet. She had her blonde hair flowing in the wind, and donned black sunglasses to protect her eyes during the bright afternoon.

Britney then asked Sam, “Are you okay?” and when he assured her he was, Britney exclaimed “This is so much fun!” The couple clearly wanted to entertain their fans, as the video then cut to a new location with a black and white graphic that read “one hour later” across the screen to show that Britney was still riding piggyback on Sam.

Their location was new, with rocky peaks behind them, as they were heading on a steep incline with hunky Sam still carrying his sweetheart and getting quite a workout in the process. The 27-year-old personal trainer’s buff leg muscles bugled with every step as he wore workout shorts that came to just above his knees. His ripped arms could be seen holding Britney’s legs up thanks to his blue Nike sleeveless tank top.

“Sorry about this, I think we went the wrong way,” Britney joked as Sam asked “are we there yet?” Wherever their destination was, Brit said they had about “30 minutes left” on the hiking trail. “I feel like I’m on a horse. This is great,” the singer exclaimed delightfully.

The couple had distinctly different captions for their IG posts though. Britney shared, “Man it’s so much fun out here !!!!! Especially when you don’t have to do ANYTHING AT ALL!!!!! @samasghari,” while Sam wrote, “Must be nice @britneyspears,” along with a laughing face emoji. 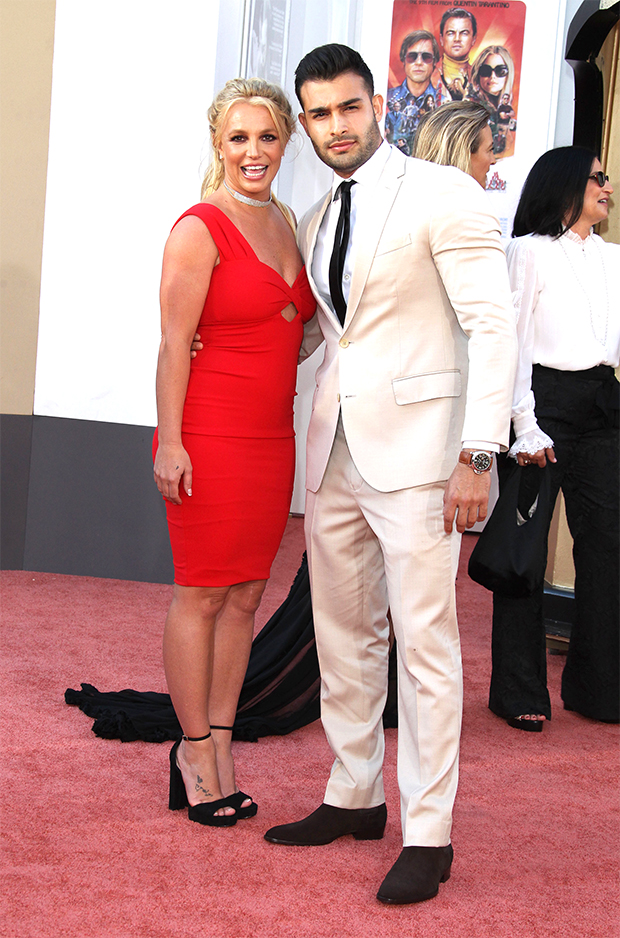 Britney Spears and boyfriend Sam Asghari are seen on a rare public date night, attending the July 2019 L.A. premiere of ‘Once Upon A Time In Hollywood.’ Photo credit: Splashews.

Brit was obviously being playful in her videos and having a blast, which came as a relief to her fans. Jersey Shore‘s Nicole “Snooki” Polizzi gushed, “Lmao i love you,” while user @azuresweet commented, “It’s so nice to see her doing little skits again :) makes me happy.” Fan @ivan6891 noted, “A queen should never have to walk,” while @josephmccarthy made a pun with one of her best known songs, writing about Sam, “He’s a slave 4 u.”

On Sam’s page, fans thanked him for protecting and loving Britney, with @britninicole05 telling him “take care of our girl” with a heart emoji. After the recent Framing Britney documentary, fans are just thankful that Britney has Sam in her corner to give the singer a taste of a happy life, after so many troubling questions were raised about her ongoing conservatorship, especially under her estranged dad Jamie‘s control. A day after the doc dropped on FX and Hulu, Sam said in a statement, “I have always wanted nothing but the best for my better half, and will continue to support her following her dreams and creating the future she wants and deserves.”