“Music definitely transcends barriers. I know it sounds like a cliché,” says entertainer David Bisbal in an EXCLUSIVE interview with HollywoodLife, “but music is a universal language.” This is no more evident than in “Tears of Gold,” a collaboration between the Spanish vocalist and country music star Carrie Underwood. United for this bilingual bop, “Tears Of Gold” sees Carrie sing in Spanish, and together with David, the two deliver an electrifying pop dance track that will bring a tear (of joy) to your eye. It’s certainly golden, having racked up over 8 million cumulative worldwide streams.

“Carrie has a powerful voice, and I knew right away that she was exactly what we needed for this,” says David, who knows what he’s talking about. Since emerging from the television competition, Operación Triunfo, David has gone on to win 3 Latin Grammy Wards, a trio of Latin Billboard Awards, and work with such acts as Luis Fonsi, Miley Cyrus, and Rihanna. The Almería, Spain native has sold more than six million records worldwide, including his 2020 release, En Tu Planes. The multi-platinum album received a deluxe re-issue at the end of 2020, capping off a year that saw him connect with new fans and reach new levels of success.

That momentum will carry David into 2021. As fans wait to see what this superstar does next, David chatted with HollywoodLife about collaborating with Carrie on the track, which tracks you should check out on En Tus Planes, and what he hopes to accomplish by year’s end. 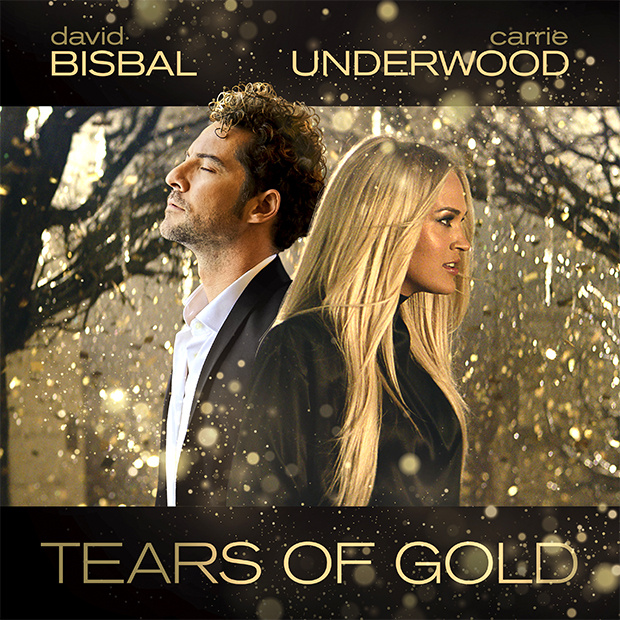 HollywoodLife: You teamed up with Carrie Underwood for “Tears Of Gold.” How did this bilingual collaboration happen?

I was looking for the right artist to sing with me on this great track. I sent Carrie the song, and when I heard she wanted to collaborate, it was a dream come true. She did an amazing job, and she asked to sing her verses in Spanish. I am so proud of her.

You previously worked with Rihanna, Miley Cyrus, and Luis Fonsi. How does “Tears Of Gold” differ? Did you feel like you had to bring a different side of you to match Carrie’s vibe?

Carrie has a powerful voice, and I knew right away that she was exactly what we needed for this track to bring the vibe we wanted. I knew I had to give my best also.

We recently had the first-ever all-Spanish language album top the Billboard 200 chart. Do you see this proliferation of Spanish/bilingual music as a result of shifting demographics? Or is there something about the music that transcends language barriers?

Music definitely transcends barriers. I know it sounds like a cliché, but music is a universal language.

You kicked off 2020 with En Tus Planes. You said that the three ‘can’t-miss’ songs on the album were “En Tus Planes,” “Amor Amé,” and “Sabrás.” Almost a year later, do you think these three are the “must-listens” of the album? If not, which songs have earned that title and why?

I probably said it at that time to share some of the newer songs. So, today I will tell you to listen to Carrie’s amazing performance on “Tears of Gold.” En Tus Planes is a really special album that includes great collaborations, and I was lucky to sing with so many unique artists in diverse genres.

It’s hard to say how 2021 is going to look like. But, what do you want to accomplish by the end of next year?

I believe we all want the same… that this pandemic ends…. But I will continue making music and have hope that we can all enjoy live concerts together soon.

“Tears Of Gold” is out now.

If all goes well, David will be on the road come this fall for the rescheduled En Tus Planes tour. Tickets purchased for the initial 2020  tour will be valid for the new dates. The new confirmed dates are also available now at ticketmaster.com, eventbrite.com, and ticketera.com.