Retired NBA superstar Dwyane Wade has been working out hard, and has a super chiseled body to show for it. Instead of running endless sprint drills and other endurance and cardio exercises that he did as a pro-baller, it seems D-Wade has been hitting the weight room big time. The newly 39-year-old proudly showed off his ripped six-pack, bulging biceps, firm pecs and even a muscular neck in a series of new shirtless Instagram photos, and says more are on their way. That has fans wondering if an NBA comeback is also in the works.

Dwyane wrote in the caption of the four photos he posted on Feb. 11, “Big Body 2021 shirtless pics going up” along with a curled bicep emoji. As a pro basketball player, he had to stay a little more lean and mean to run up and down the court all game, even though he was still fit and muscular. Now he’s free to get a “big body” and become as buff as he pleases.

Wife Gabrielle Union, 48, got a kick out of his hubby’s post, writing “This guy!” at his thirst trap photos and promise of more to come this year. But many others want D-Wade to try for an NBA comeback, since he’s so dedicated to working out and is looking more fit than ever. 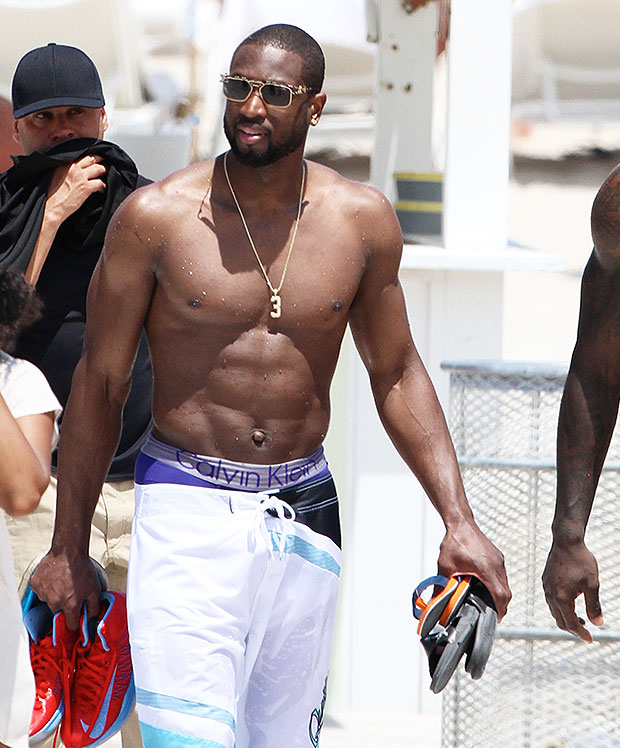 Dwyane Wade has always looked pro-athlete fit while shirtless. He’s seen here enjoying a day off work while hitting the beach in Miami on May 17, 2013.  Photo credit: SplashNews.

Dwyane played his last pro game on Apr. 9, 2019, retiring after 16 seasons in the NBA. He won three NBA titles during his career, all with the Miami Heat. But with superstars like LeBron James still out there crushing it on the court and winning NBA Championships at age 36, fans would love to see D-Wade come back out and give the NBA another go. He’s only three years older than Bron, and the two are close pals, winning two NBA titles together in Miami. Just imagine Dwyane in a Lakers jersey playing alongside LeBron again!

Dwyane revealed in an Apr. 7, 2019 interview on the ESPN show, The Jump that he was going to be doing therapy sessions to cope with transitioning away from life as a pro-baller, as he wasn’t sure what else he could be “great” at.  “I’ll be in therapy,” he said. “I already told my wife, we need to do it a little bit. I was always against it, someone who doesn’t know me, telling me how to live my life and giving me instructions. I need somebody to talk to about it because it’s a big change and I have a long life to live and there’s other great things I can accomplish. I have no idea what it is yet that I want to do. But, I want to do a little bit of everything. I want to see what I can be great at. I’m so used to being great at something.” Maybe he wants another shot at being great in the NBA just one more time!