Wayne’s World! Wayne’s World! Party time! Excellent! Nearly thirty years(!) after the first big-screen adaptation of the beloved Saturday Night Skit, Wayne Campbell (Mike Myers) and Garth Algar (Dana Carvey) are back – and they’ve got a special message: eat local. “As a local access show, we want everyone to support local restaurants,” says Wayne in Uber Eats’ Super Bowl LV commercial. “But, we’d never manipulate you the way all the other commercials do,” says Gath. Cue the subliminal messages, romantic slow-mo, and cute babies. “Yeah, we’d never shamelessly rely on a celebrity cameo,” says Wayne. “Right, Cardi B?” asks Garth – and there she is! Cardi B, on Wayne’s couch!

From there, the trio sparks a new TikTok trend, the #WaynesWorldChallenge. If you’ve ever wondered what Cardi would look like if she was either Wayne or a (surprisingly) sexy Garth, well, there you go. The spot ends with them encouraging viewers to support local restaurants through the use of Uber Eats. “Local Eats! Wayne’s World! Yummy time! Excellent!” 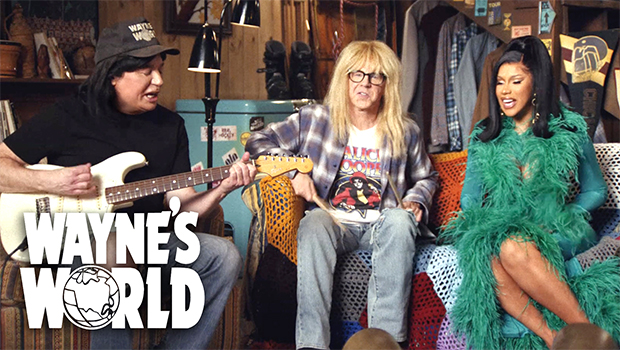 “The opportunity to partner with Uber Eats to support local restaurants and make people laugh was a no-brainer,” said Dana Carvey in a statement about the collab. “Wayne and Garth are the happiest characters we’ve ever played, and it just seemed like the world really needs them right now.”

“When Uber Eats came to us with this idea, we were excited,” said Mike. “Local restaurants need our support more than ever right now, and to be able to lend our voices and local access show to that message just felt right.”

As for Ms. Almánzar, Cardi says, “Y’all know I love to eat, and right now we have got to be supporting our local restaurants – like The Griddle Cafe in LA. So many spots are struggling right now, and it’s up to us to EAT LOCAL! That’s why I teamed up with Uber Eats and my boys Wayne & Garth to help. Uber Eats is putting $20 million towards helping small businesses across the country, and they’re even offering up free delivery… So it’s time for y’all to support by enjoying some quality eats from your local faves this Super Bowl Sunday. I’ll see you there!”

“We’re so excited to partner with Mike Myers and Dana Carney to bring Wayne’s World back to help support local restaurants,” said Danielle Hawley, Global Executive Creative Director at Uber. “We hope that by reuniting local access stars Wayne and Garth, accompanied by none other than Cardi B on the Super Bowl stage, we encourage America to Eat Local.”

Over the past year, the COVID-19 has put the hurt on a number of local restaurants and bars. Like Cardi said, Uber Eats is launching a $20 million Eat Local Relief Effort over the next six months “to help support independently-owned restaurants,” according to a press release shared in conjunction with the commercial. This campaign includes $4.5 million in micro-grants to local restaurants in major U.S. cities, an in-app donation button – which Uber Eats will match – so that people ordering on Uber Eats can give more to their local favorites. Check out eatlocaleffort.com for more details.

On top of all that, Uber Eats has also created a two-hour video — which would make it the longest Super Bowl ad ever — giving a shout out to nearly 90,000 local restaurants around the nation people can support today, Super Bowl and beyond. Fans really should put it on and check it out, especially if you want to see a certain “School’s Out” singer appear around the 02:20:42 mark. We’re not worthy!

Wayne and Garth announced their return where it all began: during an episode of Saturday Night Live. During the Jan. 30 episode, a teaser for this commercial aired, showing Mike and Dana back in the basement as their iconic characters. “And we’re back. 2020, that was a great year – NOT!” said Wayne. “We just wanted to say that we’ll see you soon for the game, which for legal reasons cannot be named,” said Wayne, noting that the term “Super Bowl” is trademarked by the NFL and can only be used by brands who want to pay for its use during their ads. Instead, Wayne and Garth said they would appear during the “gigantic bowl” and the “big game.”