If you’re a fan of Schitt’s Creek — and if you’re not, how dare you — you’ve likely been checking every day for news of when the beloved comedy cast will be reuniting again. The series came to a close in 2020 with it’s sixth and final season,  then ended on quite the high-note, sweeping the Comedy categories at the 2020 Emmys. Fans are eager to return to the quaint town that the Rose family fell in love with and find out what’s been going on with their favorite characters. One of the ideas floating around is fan-favorite Stevie Budd getting her own centric series.  Well, in case anyone’s wondering,  actress Emily Hampshire is all for it!

“I would be down for all of that!,” Emily revealed during a virtual hang hosted by Cutwater Spirits ahead of the debut of the brand’s 30-second spot on Super Bowl Sunday. It really is a no-brainer for Emily, because if there is going to be a Schitt’s spin-off, she’ll be admittedly reuniting with her favorite people ever. “The strange thing is, is that we actually all like each other. For our wrap day,  Dan got a villa in Tuscany for us all to go and spend 2 weeks to spend time together! Usually when you’re on a show, you don’t want to spend a day with your entire cast and we did. We loved it.” 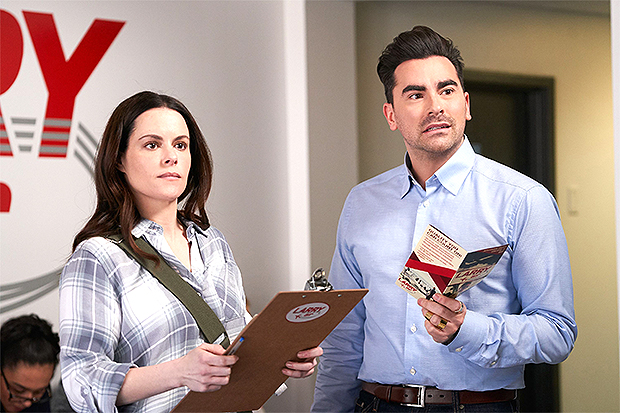 As any secret details on what could actually already  be in the works, or if any kind of reunion was coming down the pipeline, Emily wouldn’t say. “I cannot share any details — because I want to do it!” she insisted. “I would be fired. I wouldn’t be asked back.”  Fair enough, but while she — and we — wait for the news, everyone will at least get to enjoy of dose of creator and star Dan Levy when he hosts Saturday Night Live this weekend. Emily will, of course, be watching!

“It’s so exciting!,” she shared. “When we found out, we were like, I don’t know. We just feel really proud of everyone every time they kind of hit that kind of milestone… I think we should expect the laughs from him, but my hope for him is that I want something hilarious to happen to him that I can tease him about as long as we both live, maybe even after.” Now that’s friendship.

In the meantime, Emily is enjoying her new role as the Cutwater Spirits ambassador and hopes others will give the the brand a try. As for her recommendation? “Vodka Mule,” she said. “It’s the classiest canned cocktail I’ve ever had. It comes in a copper can. I do love that I can just open it and I don’t have to go out to the store or get Instacart to send me all the wrong things and then I end up with 5 lemons and ice and I don’t have to muddle anything. I don’t have to squeeze lime and get lime juice in my eye or a cut, so it’s great.”

The 30-second “Cut Out” spot is Cutwater’s first-ever ad to run during the biggest sports event of the year, and will debut on TV channels including ESPN and CBS Sports in addition to social channels.