Ahead of defending his WWE title against Bill Goldberg at the Royal Rumble, Drew McIntyre shares his strategy EXCLUSIVELY with HL, and while it might not be pretty, it sounds pretty damn efficient.

There are many ways to find success within the confines of a WWE ring. You can be a mat technician like Daniel Bryan and Drew Gulak, applying grapples, holds, and more submissions moves than there are stars in the sky. You can dazzle your opponent with high-risk, high-flying moves, taking to the sky like Richochet and Io Shirai. Or, you could do what Drew McIntrye plans to do when he faces Bill Goldberg at the Royal Rumble tonight (Jan. 30) and just cleave the man’s head off his shoulders.

“I plan on to kick his head off in the ring and keep my title,” Drew says to HollywoodLife in an EXCLUSIVE interview. It’s a simple plan, one that relies on Drew nailing his trademark Claymore kick – a running, diving boot to the side of the head – shortly after the opening bell. This “strike first, strike hard” strategy makes sense, considering his opponent used that throughout his tenure in World Championship Wrestling. Goldberg, 54, went 160-0 using similar methods. After bulldozing his opponents with a spear – a tackle that made use of Bill’s prior experience from his time on the University of Georgia Bulldogs and a short stint in the NFL – Goldberg would finish the match with his trademark Jackhammer, a vertical suplex that left opponents staring at the lights. 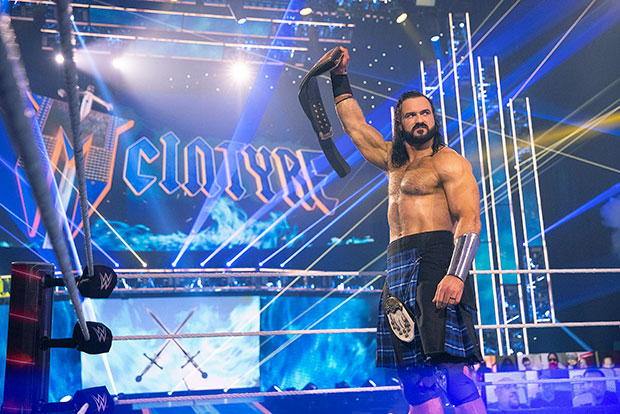 Goldberg returned to the WWE at the start of January, nine months after losing the WWE Universal Championship to Braun Strowman, and challenged Drew for a match. The WWE champ obliged – but those plans were in question after he tested positive for COVID-19.

“I am feeling good, thank you for asking,” Drew tells HollywoodLife. “When I was on Monday Night RAW a couple of weeks ago, I wanted the WWE Universe to know what I was dealing with and how important it was to get the word out, how important the WWE is treating it, and keeping everyone safe and testing everyone. I am actually asymptomatic from COVID, all the horrible side effects didn’t come my way or in the same way that people are dealing with it. So many people have been affected in so many ways, but I am feeling better, getting ready to come back better than ever.”

While chatting with HollywoodLife, Drew shared what he plans to do if Goldberg defeats him for the title, if you’ll ever see him take on The Fiend in a Firefly Funhouse match and his reaction when he finally saw himself — as a Superstar — on a t-shirt.

HollywoodLife: Either way, your match at the Royal Rumble has a chance to be fast. Either with you hitting the Claymore or hopefully not, but you possibly getting hit with the spear and Jackknife. On the chance that you lose, would you want your match to go on before the actual Royal Rumble so you could then enter the Royal Rumble and win it and go onto WrestleMania to win the title back?

Drew: I didn’t really think about that, but that is actually a good idea. If Billy — regardless of what he says otherwise, I have respect for Bill — if he were to pull out a victory at the Royal Rumble, it would be a good idea to have the Royal Rumble match after our match. Then, I could enter it so I could Claymore 29 other Superstars over the top rope and head into the Main Event of WrestleMania to get back my title… But I plan on to kick his head off in the ring and keep my title.

When it comes to WrestleMania, this year is going to have fans and be in Tampa. How great is it that the next three locations have been announced? What do you hope to do for them, and how great is it that you’ll actually be able to perform in front of fans?

It is amazing. Last year at WrestleMania, I had my biggest moment defeating Brock Lesnar. Now we are returning to Tampa at Raymond James Stadium in front of the WWE Universe, family, friends. The WWE gives people an escape from what life has been like, so to celebrate with them is going to be very special.

It will also be two nights, if you are the champion, would you want to wrestle and defend your title both nights?

Absolutely. If the challenge is there, then I am all for it. I’ll be there. I’ll be in the ring and ready for anything and everything. I would happily wrestle both nights. The next couple of weeks will be very interesting to see what it will become and how it will all turn out, but it is WrestleMania, so it is going to be incredible, and I can’t wait to be a part of this year, and then when it goes to Dallas and LA. And being champion will make it that much sweeter.

Do you have a match or moment that you think gets overlooked/is a bit underrated?

I think it would have to be my match with Seth Rollins at Money In The Bank. It was my first title defense after WrestleMania, where I beat Brock Lesnar and became champion. I know many people still weren’t sure if I was legit, if I was right for being champion. Seth Rollins and I had an amazing match, we always do. And Seth Rollins is so accomplished in the ring, so it was a great test and gave the fans a reason to get behind me even more and see that my title reign was going to be something. It made a lot of people believe.

Wrestling merch is some of the best out there – do you have a personal fave? Do you remember your first piece of wrestling memorabilia?

That’s funny because I had all of it when I was a skinny kid. I was a big fan and didn’t always look good in the shirt — which reminds me, I remember one of my first shirts, though. It was actually a picture of me with my arms folded. I loved having a shirt, but at the same time, I kind of hated it because I was thinking, what grown man is going to buy a shirt with a guy with his arms folded. (laughs) My shirts have gotten much better as time has gone by, but I will never forget that first shirt where I was a bit disappointed about how it looked.”

One of the main ways that sports entertainment has adapted to COVID-19 has been the cinematic match. They’ve ranged from the surreal (Firefly Funhouse) to the spooky (Haunted House of Terror) to the realistic (WWE Money In The Bank 2020). Is that something you’d like to try, or do you think your current run wouldn’t work in that format?

I don’t think you’ll ever see me in a Firefly Funhouse match. I think the way I present myself on TV is a little different. Not to say that the right opponent or situation couldn’t work, but I think the Drew McIntyre people see week in and week out would be better off seeing him in a ring fighting, defending the title against all challengers. I would like to build the WWE championship with matches man to man, that is how I would like to represent the title. I think that is what it deserves.

Also, get ready for WrestleMania as it heads to Tampa on April 10 and April 11 at Raymond James Stadium. Stay close to WWE.com for all details!