The first two episodes of WandaVision launched on its premiere day, and the second episode began to set the stage for the unraveling of what’s really going on. Wanda and Vision are still living out their black and white sitcom life without a care in the world. Wanda goes to a get-together in honor of the upcoming talent show with the other ladies of the neighborhood, including Agnes and Geraldine (a.k.a. Monica Rambeau). Wanda also meets the leader of the pack, Dottie. After everyone leaves, Dottie tells Wanda that she’s “heard things” about Wanda and Vision.

Wanda is caught off guard and assures Dottie that she doesn’t mean anyone “any harm.” Dottie replies, “I don’t believe you.” Suddenly the radio turns on and someone calls to Wanda. “Can you read me?” the mystery man asks. Dottie asks Wanda who is on the radio before turning to Wanda and saying, “Who are you?”

The voice continues to call out to Wanda. “Who’s doing this to you, Wanda?” the man asks. Wanda is in complete shock. A few moments later, the radio and the glass in Dottie’s hand explodes. When Dottie starts bleeding, it’s in color.

The next scene is a commercial for a Strucker watch. A close-up of the watch is shown, and there are some very telling clues about what’s at the heart of this story. The watch bears the HYDRA symbol and “HYDRA” is written in plain sight. The Strucker watch is a clear nod to Wolfgang von Strucker, one of the leaders of HYDRA. HYDRA has been one of the MCU’s biggest threats since Captain America, and it appears HYDRA may be far from extinct. 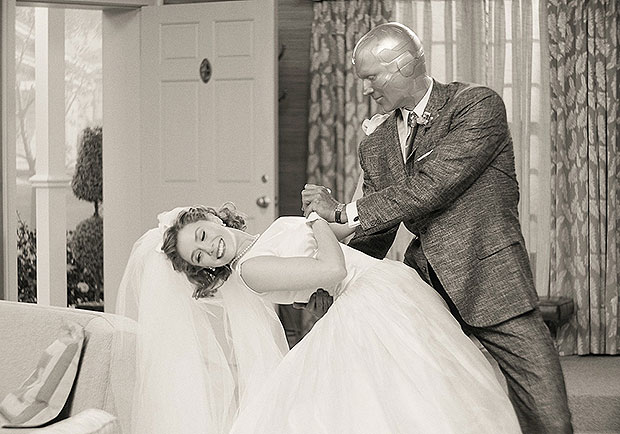 Strucker, Wanda, and Wanda’s brother Pietro were first introduced in a credits scene following Captain America: The Winter Soldier. Strucker showed List where the Scepter was and introduced him to Wanda and Pietro, who were being held prisoner in separate cells. This led right to Avengers: Age of Ultron. Strucker was eventually arrested by the Avengers and later killed by Ultron.

The reasons behind Wanda’s alternate reality are not explained in the first two episodes. If HYDRA is making a comeback, then it will be met with full force by S.W.O.R.D., the subdivision of S.H.I.E.L.D. that stands for Sentient World Observation and Response Department. The S.W.O.R.D. symbol is seen on the toy helicopter Wanda found in her yard and on the back of the Beekeeper’s suit at the end of the second episode.

Related: ‘Agatha: Coven Of Chaos’ Cast & Everything Else To Know About The Marvel Series