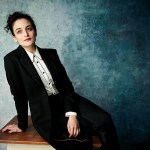 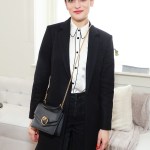 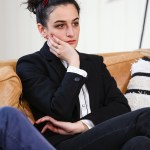 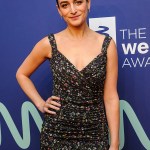 Jenny Slate is expecting her first child with fiance Ben Shattuck. She shared the news by showing off her baby bump during an interview with Seth Meyers.

Leave it to Jenny Slate to have an epic and unique pregnancy announcement. The actress appeared on the Dec. 10 episode of Late Night With Seth Meyers and surprised viewers by revealing that she’s expecting. The interview was virtual, and Jenny stood up to give a full view of her bump for the camera.

Jenny was opening up about what she did during her coronavirus quarantine when she shared the news. “I kind of hunkered down and I baked a lot of bread,” she explained. “But I just want to say….I think I may have baked, like, TOO much bread. Or eaten too much bread. You tell me, Seth. It’s different.” That was the moment that Jenny stood up and revealed her stomach — no, it was not bread that led to that belly!

Once the announcement was out there, Jenny explained why she’s embracing being pregnant during this difficult time. “It’s very nice to have something that’s incredibly positive during a time that’s hard and sad,” she admitted. “It’s nice to have a little secret treasure. I basically have just been chilling out, doing exactly what I want to do, not seeing anyone or having to figure out how to gracefully wear pants. I haven’t worn pants in many moons.”

Jenny has been engaged to her fiance, Ben Shattuck, since Sept. 2019. The two have spent their coronavirus quarantine in Massachusetts, and Jenny has been doing at least an hour of yoga or meditation a day to relax during her pregnancy. Jenny and Ben were first rumored to be dating at the beginning of 2019 when they were photographed packing on the PDA at the Sundance Film Festival. They happily announced their engagement just nine months later.

“He took me to France and made a picnic and made me feel happy and free and then he asked me to marry him and I screamed YES,” Jenny gushed at the time. “I love you [Ben]. You are the kindest and brightest and I am so grateful and here we go and keep going.”