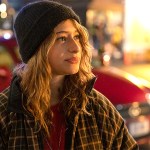 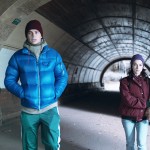 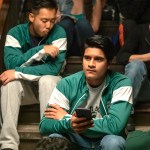 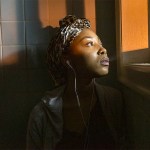 The third episode of Grand Army marked a major turning point in Netflix’s new teen drama. Joey is raped by two of her best friends, George and Luke, in the backseat of a New York City cab while her friend Tim watches and says nothing. The scene is intense and hard to watch, but it provides a necessary lesson when it comes to consent. Joey told George and Luke to “wait” in the middle of making out, but they ignored her plea and assaulted her.

Joey tried to press charges against them, but there wasn’t enough evidence to move forward with the case. Joey confronted George, Luke, and Tim at the end of the season in hopes of getting them to admit they had done wrong, but she didn’t even get that from the people who claim to be her friends. HollywoodLife talked EXCLUSIVELY with Anthony Ippolito about getting inside George’s head, his thoughts on whether Joey could forgive George, and how he prepared to take on the role.

You were playing baseball before you go this role. Have you always been an athlete and an actor?
Anthony Ippolito: I always kind of juggle the two. They were my two biggest passions in my life. Pretty much growing up, I was either working on one or the other. I would try to manage each schedule with the other one. So if I was playing a baseball game, and I had an audition or we had a practice, I’d go to my coach and be like, listen, I’ve got to miss this practice. I’ve got to go to this audition. Or if we were playing in a championship game, and I had a commercial audition, I would tell my agent, please, I have a championship game. So it was always trying to juggle the two of them because I loved both of them so much. But it was pretty crazy. I feel like I’ve gotten the privilege since I’ve been doing both of those things to meet all different types of people and experience all different types of things. I’m grateful for it.

Are you still playing baseball?
Anthony Ippolito: Right now, I’m not, but I miss it. What happened was I actually was playing college baseball. One of the reasons I went to Baruch was because it’s a school in Manhattan. It’s on Lexington, and I figured that I would be able to continue pursuing my acting career and be able to get my degree and play baseball. I was trying to do everything. I was auditioning, doing school assignments from professors, studying for exams, taking acting classes and scene study classes in lower Manhattan, working with a coach, and auditioning. It was a lot. But anyway, I broke my hand on the baseball field playing for Baruch, so I was out for the season after that. But like a week after that, I ended up booking Grand Army.

I would say in the past 4 or 5 years we’ve seen a resurgence of teen drama with 13 Reasons Why and Euphoria. What do you think Grand Army gets right about today’s teens that maybe those shows don’t or don’t explore enough of?
Anthony Ippolito: First and foremost, the thing I picked up on just from reading the sides for the audition was the dialogue was so on point. Katie Cappiello just had such a knack for understanding the way teenagers communicate in 2020. I was just absolutely leveled. When I was reading, I was thinking that I’ve heard these conversations. I’ve heard these words that you don’t see in TV shows. I used to watch teen shows as a teen and would be sitting on my couch like, why are they speaking like this? It’s very clear that some older person wrote it. You want the voice to be heard more accurately, and I think Katie did a great job of that. But more than just the dialogue, it’s just these situations that are presented in the show are so gray and so hard to unpack and so unclear and so well-rounded and so human. I feel like Katie really took the time to dive into the humanity of teenagers.

This show really dives deep into just how much social media impacts today’s teenagers. For Gen Z, it’s all they’ve ever known. I’m a millennial and social media wasn’t as much a part of my daily life as it is now. I can only imagine what it’s like to be a high school student today.
Anthony Ippolito: I definitely experienced a lot of it, but I’m sure it’s even worse now. I couldn’t do it. You see it in the show, it’s like this extra added element that kids have to deal with. It’s added pressure. Life’s hard enough in high school. High school has always been a harsh environment. If you speak to my parents or anybody’s parents, they’ll tell you high school can be a tough place, even without all that. It just makes everything so much harder because people, for some reason, feel that they have the freedom to just unload whatever poison that they’ve amassed in their daily lives through the internet. It really does affect people, and you kind of see that in Grand Army.

In the first season, your character, George, sexually assaults his friend, Joey, in the backseat of a cab. As an actor, what did you do to create a safe space, not only for yourself but especially for Odessa A’Zion while you were filming such an intense scene?
Anthony Ippolito: I think the answer is kind of right there. As an actor, it’s your duty to tell the story as honestly and as truthfully as possible. I think everybody involved in that sequence was completely committed to that. There was a trust there creatively that we had with one another. We’d also developed friendships by that point, but I think in terms of people going through that experience, my whole person was just completely making sure Odessa felt safe and comfortable throughout everything. If something seemed a little off, it was like, okay, let’s communicate. I think also making sure that there was just an extremely transparent dialogue throughout everything. There was nobody refraining from saying anything. Everybody felt comfortable to express any type of discomfort. All of those things were absolutely necessary.

Did you educate yourself in terms of sexual assault education and consent education?
Anthony Ippolito: Yes, definitely a little bit. I read the play Slut by Katie Cappiello and that taught me a lot. But also just being a high schooler so recently and just seeing, not necessarily sexual assault, but just certain dynamics that exist in high school between males and females. There was always something that just seemed a little off about it to me and just certain elements of it, whether it be the toxic masculinity that exists or the hookup culture. I think it wasn’t as much of a cerebral exploration of sexual assault in order to play this character as it was just trying to understand those dynamics that I was talking about.

I think the scene that’s stayed with me throughout the entire series is in the finale when Joey confronts George, Luke, and Tim about what happened. She doesn’t get the justice that she deserves. George and Luke refuse to admit any wrongdoing. Do you think that there’s a part of your character that knows what he did was wrong or has any regret about what happened?
Anthony Ippolito: One hundred percent. This was a conversation that I had with Katie and the directors many, many times. Just understanding that there’s such a miscommunication just as a society in terms of what sexual dynamics are, whether it be because of pornography, because of how sexuality is portrayed in the media, or the objectification of women in the media, all of these things that result in just such a pollution of the mind, was really important. This kid is her best friend. This is somebody that he grew up with. Somebody he’s known for his entire life, and someone she’s known for her entire life. He goes over to her house just on a whim. There was just this fluidity and trust. When you have developed a friendship like that, there’s a certain amount of intuition that you kind of get with one another. You can tell if something’s off. You can tell if there’s a betrayal or something went wrong. I don’t know to what degree he thinks what went down, but I do think he definitely knows he did something wrong.

I think the #MeToo movement has made our society look at how we’ve viewed sexual assault for so long and what constitutes consent. George and Luke both use the excuse of “you didn’t say no” and “you were drunk” with Joey, excuses we’ve heard for decades. Why do you think those excuses, even in today’s age, are still so heavily used?
Anthony Ippolito: Like I said earlier, I just think there are so many misunderstandings that we have as a society that haven’t been altered or challenged, as much as hopefully, Grand Army is going to. In the media, we’ve kind of let certain things pass as a collective. It’s truly disheartening, but I think Grand Army is really pointing a way forward in the sense that we can start to have these uncomfortable conversations, and we can start writing wrongs that exist within our society. Eventually, it won’t be a norm to say something like that because, hopefully, those things will have been changed.

Do you think Joey could or should forgive George?
Anthony Ippolito: Do I think Joey should forgive him eventually? I think there’s more of a burden on George than there is on Joey in this instance, to take action of some sort if there were to be a moment of reconciliation. But obviously, if George were to make an attempt to reconcile, that’s fully in Joey’s hands. That’s fully her decision. She has every right to pretty much say whatever she wants in that situation regarding how she feels about that.

For most of the Grand Army cast, this is their first-ever major role. What was it like bonding with this cast and coming together to create this show?
Anthony Ippolito: We had an amazing time shooting it. Even when we weren’t shooting, we had parties, we were hanging out, we would go shopping together, we would eat meals together. To what you were saying, none of us had really experienced anything on this sort of a level in terms of working on something of this size. We were unified in that sense. We were all just such normal people from all different backgrounds just coming together saying this is pretty much the coolest thing I’ve ever done, and we were all doing it together. There’s another level of reality that comes with experiencing something like that with people who are very similar to you in the sense that they’ve never done this either. You feel it more. It’s hard to explain.

If you’ve experienced sexual assault, you’re not alone. To speak with someone who is trained to help, call the National Sexual Assault Hotline at 800.656.HOPE (4673) or chat online at online.rainn.org.