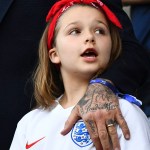 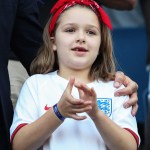 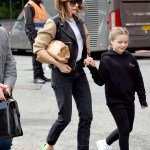 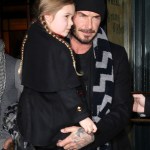 Victoria Beckham showed off her family’s love when she shared a snapshot of ‘best daddy’ David Beckham and daughter Harper kissing each other on the lips once again.

David Beckham, 45, and his daughter Harper, 9, shared a sweet kiss and a smiling pose in two Instagram pics posted on Oct. 20, one year after the duo made headlines for getting backlash on a similar lip-kissing pic. The photos were posted by proud wife and mom Victoria Beckham, 46, who proved she doesn’t care what other people think about the father and his youngest child showing their affection for each other through the smooch on the lips. “The best daddy💕 @davidbeckham #HarperSeven X,” she captioned the post.

In the first photo, David and Harper are standing in front of a large bouquet of flowers as they kiss face to face, and in the second photo, they are standing in the same spot as David puts his arm around his little mini-me and they both smile. The cute little gal is wearing a white long-sleeved top and the former professional footballer is wearing a long-sleeved brown top and a newsboy cap.

The post seemed to get mostly positive responses in the comments section of Victoria’s account, which is quite a difference from previous times David has kissed their kids, including Harper, and sons Brooklyn, 21, Romeo, 18, and Cruz, 15, on the lips. After a snapshot of the loving dad and Harper sharing a kiss at the Women’s World Cup soccer match in Le Havre, France in June 2019 made its way online, there was negative feedback on social media. He also brought on clap backs from followers when he kissed Brooklyn in a video, which was posted by Victoria, that showed his oldest son surprising him at a restaurant in May 2018.

David isn’t the only one who’s gotten negative responses from kissing his kids on the lips. Victoria has also been the target of unsupportive messages. After she posted a pic of herself kissing Harper on the mouth while the two hung out in a lake in July 2016, she received a number of comments from critics calling it “wrong” and even saying it looked like they were “making out.” Other celebrities have also faced similar backlash for kissing their kids on the lips, like football player Tom Brady, 43.

Luckily, none of these shocking responses have stopped these cute families from still sharing their memorable moments together! We commend them for staying true to themselves!