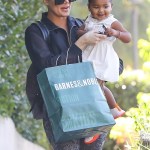 True Thompson had a special reason to party this past Sunday: it was her nanny’s birthday! On Oct. 18, Khloe Kardashian and Tristan Thompson’s two-year-old daughter celebrated her nanny’s birthday and together they blew out the candles on a pink-frosted birthday cake. Khloe was also there for the festivities, and held True as the mom-daughter duo assisted the nanny with making her birthday wishes. True’s stuffed animals also “helped” blow out the birthday candles!

In addition to the pretty cake, Khloe’s kitchen was decked out with a platter of donut bites and fuchsia flower petals strewn across the countertop. True matched the pink theme of the birthday setup in a pink dress as well! Newborn care specialist Andreza Longanbach filmed the little celebration, according to Kardashian fan account @dashkids.

Fans were especially impressed to see Khloe take the time to make her nanny feel extra special. “As a nanny, this is awesome to see. We are def underappreciated and over worked. But we do it bc we love what we do,” one fan commented. Another fan raved over the Keeping Up with the Kardashians star’s parenting skills, writing, “Khloe is so humble and have such a big heart.. some rich ppl didn’t even know their nanny’s name.”

Khloe went without a nanny, though, during the strictest part of quarantine earlier in the pandemic. This meant Khloe had to include her daughter in her workouts, which she revealed in an interview with Refinery29 published on Oct. 13. “I definitely think because of my fitness journey and already having such a regimented schedule when it comes to working out, it kind of kept me sane during these crazy times. I had to learn to adapt by doing mommy-daughter workouts,” Khloe told the outlet. “[True] is obviously not working out, but it’s things like me putting her in a wagon and sprinting up a hill. I belted a wagon to my waist because I don’t have any help. We’re all just trying to figure it out.” It looks like Khloe’s receiving a little help now, though!