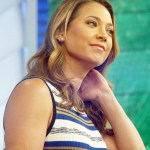 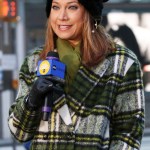 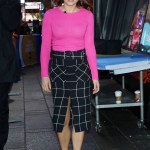 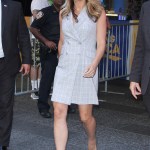 Ginger Zee handled her work-from-home situation like a total pro, when her two-year-old son, Miles, decided to hand his mom a craft he had been working on during her ‘Good Morning America’ weather report!

Ginger Zee appears to be handling her work-from-home setting like an absolute, multi-tasking champion. The Good Morning America meteorologist, 39, was going about her business on the morning of September 28, reporting on the devastating wildfires affecting citizens in Napa County, CA. Although the subject matter was incredibly heavy, Ginger and viewers got some much needed levity when the accomplished meteorologist’s son, Miles Macklin, 2, made an appearance!

“Hi Miles,” Ginger said to her son as the visual transitioned from footage of Napa County back to Ginger in front of her home green screen. “This hasn’t happened in a long time,” she assured viewers as her two-year-old held up a craft he had been working on. “No school today,” she further explained. Kindly taking the craft that her son made for her, Ginger seamlessly continued to report the weather.

.@Ginger_Zee had a very cute surprise guest during her forecast! 😊 pic.twitter.com/5pIIrRyCv5

The top of Miles’ head could just be glimpsed as Ginger finished up her report. “I’ll check this out and then we’ll go ahead and get a check a little closer to home,” she said, taking a glance at what her son had made for her. It was such an adorable moment between the mother and son, and parents across America who are still working from home while they home-school their children amid the coronavirus pandemic could more than relate!

As it would happen, this isn’t even the first time Miles has joined his mom in front of the camera and green screen! On May 22, Ginger shared another sweet clip from her weather report where she held Miles on her hip while wrapping up her segment. “I obviously just got a little friend [here],” Ginger said to viewers while looking so lovingly at her little boy. All that Miles could muster to say was the word “donut,” which Ginger took as a sign that Miles “wants a donut.”

Every Friday Miles finds a way to make it on tv (usually during my promo with @reggieaqui and @itskumasi ) and request a donut. He has had two donuts total in his life but he reads a book that has donuts in it every day. So he is ALWAYS thinking about them. #wfh 🍩

“Every Friday Miles finds a way to make it on tv (usually during my promo with [Reggie Aqui] and [Kumasi Aaron]) and request a donut. He has had two donuts total in his life but he reads a book that has donuts in it every day. So he is ALWAYS thinking about them,” the mother-of-two captioned the May clip.

Ginger, who appeared on the 22nd season of Dancing With The Stars, shares Miles and her oldest son, Adrian Benjamin Colonomos, 4, with husband Benjamin “Ben” Aron Colonomos, 39. All over her Instagram feed are adorable photos of her two boys. Although the pressures of working from home and being a parent weigh so heavy on so many shoulders during this unprecedented time, it’s great to get a fun respite and see someone like Ginger handling that work-from-home lifestyle while parenting like millions across the country.