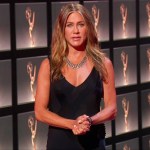 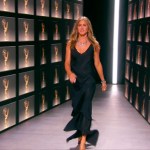 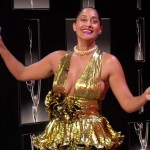 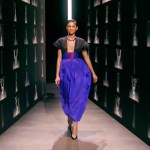 The 2020 Emmys may have been from home, but Zendaya still brought her fashion A-game. She wowed in a pretty purple dress for the virtual ceremony and then changed for when she accepted her EMMY!

Zendaya is already a fashion icon at 24 years old, and she certainly showed off her incredible style during the 2020 Emmy Awards. The actress, who won the Emmy for Outstanding Lead Actress in a Drama Series for her role on Euphoria, stunned in two outfits throughout the night. When she was announced as an Emmy winner, the actress was wearing a custom Giorgio Armani Privé black matte weave skirt with powder-pink polka dots, paired with a black velvet bandeau top fully embroidered in pearls and crystals.

In her first look of the night, Zendaya wowed in a regal purple and black gown. Zendaya’s hair was pulled straight back and she accessorized with a gorgeous necklace full of purple jewels. Zendaya was at the Staples Center to help present an award alongside host Jimmy Kimmel, and she made her walk to Jimmy her own personal runway!

Since this is Zendaya we’re talking about, she obviously had more than one look for the Emmys, even if it was virtual. Just a few hours before the ceremony, she showed off her first look of the night. In a video posted on her Instagram Story, Zendaya twirled in the plunging purple and black dress she had on at the Staples Center. She also shared the first glimpse of her pearl and crystal-embellished crop top. It sparkled and shined in her quick Instagram Story.

Zendaya was a first-time Emmy nominee this year for her role as Rue Bennett on Euphoria. The young actress showed off her incredible range as the recovering addict in HBO’s teen drama series. Zendaya will return as Rue in the show’s second season, which has yet to start filming. But she’ll be heading into season 2 as an Emmy winner! With this win, Zendaya is now the youngest actress to win Outstanding Lead Actress in a Drama Series.

The actress has an exciting year coming up. She’s starring alongside Timothée Chalamet in the highly-anticipated movie Dune, which is set to be released in Dec. 2020. She also filmed an entire movie while in quarantine. She reteamed with Euphoria creator Sam Levinson for the romantic drama Malcolm & Marie, which also stars John David Washington. The movie doesn’t have a release date yet, but it will premiere on Netflix.