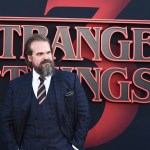 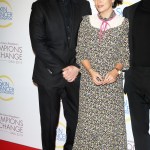 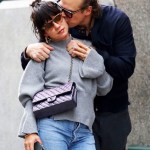 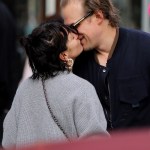 Congratulations to David Harbour and Lily Allen — the ‘Stranger Things’ star and the ‘Smile’ singer just got married, Lily announced with adorable photos from their surprise wedding on Instagram!

Congratulations are in order for David Harbour and Lily Allen! The couple, who began dating in August 2019, tied the knot at the Graceland Chapel in Las Vegas on September 7, just one day after they obtained their marriage license, according to a court document obtained by HollywoodLife. Lily later confirmed the happy news with a slew of adorable wedding pics on Instagram on September 9, which included looks at her pretty wedding dress.

Lily simply captioned her photos with red hearts. She looked ultra chic in a 1960s-inspired Dior mini dress — in white, of course. She pinned a short veil to the back of her bouffant updo. But the best part of her wedding look was her giant smile. She and David, who looked dapper in a simple black suit and pink rose boutonnière, couldn’t stop grinning at each other after saying “I do.” In front of an Elvis impersonator, no less! It couldn’t be a Las Vegas chapel wedding without one, right?

David commented on one of Lily’s wedding photos with lyrics from Elvis’ “Can’t Help Falling In Love”: “…darling so it goes, some things are meant to be.” After their intimate ceremony, the newlyweds headed to In-N-Out for burgers in lieu of a reception. David followed up Lily’s post with some adorable photos of his own. He revealed that her two daughters — Marnie Cooper, 7, and Ethel Cooper, 8 — were in attendance! Lily was wearing a black and white mask to order their burgers and shakes.

“In a wedding officiated by the king himself, the people’s princess wed her devoted, low born, but kind credit card holder in a beautiful ceremony lit by the ashen skies courtesy of a burning state miles away in the midst of a global pandemic,” David wrote as his caption. “Refreshments were served at a small reception following.”

Marriage rumors have actually followed the Stranger Things star, 45, and the “LDN” singer, 35, since March 2020. During an Instagram Live, the couple, who had started quarantining together, made some cryptic remarks while answering fans’ questions that had them convinced they’d gotten married on the sly. Lily flashed her diamond ring during the Q&A while lamenting over her last album, No Shame, only selling 5000 copies.

“That’s how bad things are these days. You think you married a pop star? You didn’t!” she joked to David. She quickly realized her slip, adding, “Not that we’re married! We’re not married, I just want to make sure you know.” David jumped in, telling Lily, “But you are my wife,” and the British singer replied, “Yes, we do pretend.” So… that didn’t help fans figure anything out.

David and Lily were first spotted together in August 2019, when they enjoyed a date night out in London. The twosome were seen enjoying “The Lehman Trilogy” at Piccadilly Theatre, later grabbing a bite to eat before speeding off in a taxi. The two had a number of low key dates before confirming their relationship in October 2019. The proof? Them making out on the street in Manhattan the day after he hosted Saturday Night Live — and she went as his date to the after party.

This is the first marriage for David, who was previously in a relationship with Fantastic Beasts and Where to Find Them star Alison Sudol, 35. Lily’s divorce from ex-husband Sam Cooper was finalized in 2018.