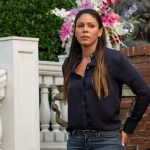 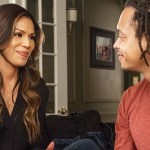 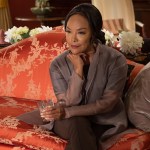 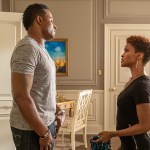 Her plot to hurt Jacob has made Kerissa someone fans love to hate. But even the actress who plays her admits that this time the scorned wife may have gone too far.

The latest episode of Greenleaf ends on a cliffhanger and sees [SPOILER ALERT] the family face the fact that they may lose their home.

As fans know, the whole situation began in Season 4 when Kerissa Greenleaf (played by Kim Hawthorne) tried to blackmail her husband Jacob (Lamman Rucker) by thrusting a will in his face.

The will, she claims, proves that his dad, Bishop James Greenleaf (Keith David), committed murder to fraudulently obtain their lavish house. It’s a plot that is poised to blow up in her face and Kim says that – out of everything that Kerissa has done recently – it’s the one thing she feels remorseful about.

“That is something that she regrets,” Kim, 52, tells HollywoodLife EXCLUSIVELY. “If you look at it, [the house] was a legacy for her children as well and, regardless of what’s going on between Jacob and her (because relationships have ups and downs), that is her family still.

“Sometimes hurt people hurt people and I feel like that’s kinda where Kerissa is this season. She’s acting out. She’s lashing out. But did she expect that it would ever go this far? Absolutely not.”

Kerissa and Jacob’s ups and downs have been marred by his frequent philandering and his inability to hold down a job. For the first three seasons Kerissa took him back repeatedly, but in Season 4, something changed. Most notably she had an affair, caught chlamydia and gave it to Jacob. Those things, Kim says, Kerissa absolutely does not regret.

“Does he regret sleeping with the lady in the church? Does he regret cheating on [Kerissa] before that?” she asks. “There’s always a double standard.” Before filming started on Season 4 of the show Kim says she asked the writers, “When is Kerissa going to get hers? When is she going to do something for herself, as opposed to continuously recommitting to her dysfunctional situation?”

In Season 4, she adds, “That’s when she said, ‘I’m gonna get mine, no matter what.’” “And that’s when you saw her manipulating to get the house, manipulating with the will,” Kim says, “because now she’s thinking about herself. Before she was not.”

As for the fans who light up Twitter every Tuesday night slamming Kerissa for her actions, Kim makes some valid points. “I always say people get so distracted by Lamman Rucker’s good looks that they never really want to look at what his character is [doing] on the show,” the New Jersey-born actress says. “I think women are like, ‘Well, if I was her, I would just love him no matter what.’ It’s not true. If Jacob’s character was ugly, y’all would have kicked him to the curb!”

As the hit series draws to a close, Kim reflects on what it has been like playing Kerissa for five seasons. “I’ve enjoyed playing this strong, black woman,” she says. “Natural hair. Brown skin, paper bag or darker. She’s an authentic version of a woman that I know. I have been raised by these women… I’m so proud to have been able to bring her to the screen, because I feel like this woman has been marginalized in our American society.”

The fifth and final season of Greenleaf airs on OWN on Tuesdays at 9pm EST/PST.