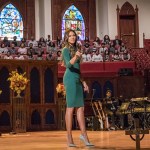 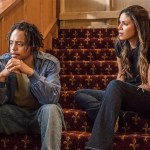 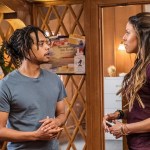 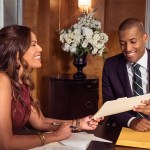 The tension is heating up on ‘Greenleaf.’ As always, Grace is at the center of a bombshell that could tear her family apart and actress Merle Dandridge promises that the plot is going to get even messier.

Greenleaf wouldn’t be Greenleaf if there wasn’t some secret family drama bubbling under the surface, ready to explode and embarrass the whole clan. And Season 4 of the hit OWN series opened with a biggie – Pastor Grace Greenleaf has a son. Not a little boy. AJ is an adult ex-con who has a grudge and whose very existence could threaten to derail the family’s plan to regain control of Calvary Fellowship World Ministries. After all, Gigi is the dynasty’s last hope to get the church back.

If you’re a fan and you’ve been watching this season, holding your breath, waiting for Grace’s sister Charity to stumble upon the truth (or worse, Calvary’s new owners, Harmony and Hope), Merle Dandridge has a message for you. Don’t expect to exhale anytime soon. “We’re on episode 5 and we have 18 episodes, so I’m just going to say ‘buckle your seatbelt,’” the 44-year-old actress who plays Grace tells HollywoodLife EXCLUSIVELY. “I’m not just saying that. It is intense…” How intense? Well, Merle says that AJ (played by Jacob Gibson) will be at the heart of the jaw-dropping plot:

HollywoodLife: The church and the message is supposed to be the guiding light [at Calvary] as opposed to just being a power play [but the characters] are so ambitious.

Merle: “I do believe all these people – even though they do some crazy stuff – love the Lord, and they have this calling on their life, they just go about it in all the wrong ways. I think we’ve all been in a place where we think our intention is right, but we may be just doing it the wrong way. What I love about this season is that you really see these characters stripped back and forced to really look at themselves, and how they’ve been doing things, and the consequence of how they have done those things. Everybody seems to be hitting that kind of wall. There’s really only one place to go when you’re there. It’s on your knees.”

HL: The central thing this season is about AJ, the child that Grace has with Noah (Benjamin Patterson). Why do you think she’s so scared to tell her family about her son?

Merle: “Well, when Grace tells anything to her family, let’s be honest, she can’t say, ‘I sneeze,’ without getting some kind of big criticism. The fact that the entire family’s place in the church hinges on her getting this job right, and here she is with a really big mark on her record. It stands to really put the entire family in peril, because if they don’t have the church, how are they going to pay for that big old house? How are they going to maintain the lifestyle that they’ve been accustomed to? How are they just going to live, and then what is their purpose?

“There is a lot of fear around airing something that I think she normally would just be like, ‘All right, this is what it is…’ But now there’s something hindering that, and it’s a huge dissonance to be on the platform like that and then carry this weight behind you. I think watching Grace work that out, watching her walk with this demon on her back while she’s trying to preach the gospel is drama.”

HL: What does she want from her son?

Merle: “She loves that baby. It was earth shattering to give that baby up. So when she lays eyes on him again… And she sees how, when she made that choice, it has set off a series of events that has made his life absolutely a nightmare, beyond what we can even imagine. Those things are going to unfold and cause more drama in the rest of the season.”

Greenleaf airs on OWN on Tuesdays at 10 p.m. ET/PT.