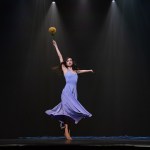 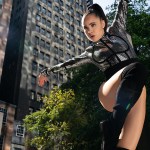 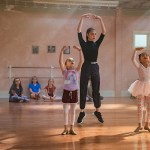 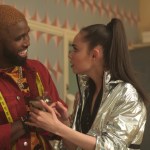 ‘Feel The Beat’ is one of Netflix’s most-watched releases right now. HL spoke with Brandon Kyle Goodman about playing Deco, the movie’s dedication to inclusion, working with Sofia Carson, and more.

Feel The Beat has stolen our hearts, and we’re totally fine with that. The new Netflix movie is perfect for the entire family to enjoy together. Brandon Kyle Goodman stars in the film as Deco, the best friend and neighbor of Sofia Carson’s April.

Brandon talked EXCLUSIVELY with HollywoodLife about why Feel The Beat is so near and dear to his heart. For the actor, it’s “exciting” to be able to play a Black queer character in a family film. Brandon was impressed that the film was interested in having a diverse and inclusive cast all across the board. He also opened up about Pride Month and what Hollywood needs to do next to open more doors when it comes to representation.

What stood out about this role that made you want to be a part of Feel The Beat?
Brandon Kyle Goodman: What I really love about the role is that he is so authentically and unapologetically queer and Black, but that’s not part of the storyline. He really just gets to exist and be accepted in this small, very country town. I feel like we don’t see that enough, but also, he’s a Black queer character in a family film. It’s all really exciting. The director was telling me pretty early on that when they were testing when Deco arrives in the small town it really played well with people who identify as queer and who are from those places and don’t feel accepted in real life. To just see that representation of queerness and blackness immediately means a lot to me, and so I’m really excited for people to have that experience.

What was it like working alongside Sofia Carson?
Brandon Kyle Goodman: My heart, my angel. She’s amazing. When you watch the movie, she’s in every single scene. She was never not working, but also one of the kindest, most generous, funniest, sweetest people from the time we started. We both had mutual days off so we’d grab dinner. We just gravitated to each other because she is such a genuine person. I think what impressed me and continues to impress me is that she has such a massive following. She’s beloved and adored internationally, but she manages to really keep her feet on the ground. You work with some people who are just not great, but she just manages with everything on her plate to still remain so kind, so sweet, so genuine, so attentive. I honestly can’t speak highly enough about her. She was just really inspirational for me.

Since this film does revolve around dance, what are your dancing skills?
Brandon Kyle Goodman: If we’re at a club, honey, I’ll drop it to the ground and I’ll pick it up slow. But I did not train in dancing. I did not do ballet. I definitely do some dance movement classes. I know my body. But if you want me to do some choreography, that is not my life.

There is so much content out there these days with all the streaming services and networks. What do you think makes Feel The Beat so special?
Brandon Kyle Goodman: I think the movie is special because from the jump they were really interested in inclusion. They were really interested in representation and making sure that it wasn’t some White lead, which Sofia isn’t, she’s Colombian. They were really interested in the top down to have a diverse and inclusive cast. A cast who represents more than just what we usually see, which is White protagonists. There was more than just diversity, there was representation. I think that’s really special in these times with everything going on in the country, specifically with Black Lives Matter. One of the conversations that we’re definitely going to continue having in Black Lives Matter and just our country is how do we create inclusion? Not just bringing people in to say we have diversity, but to really make sure that we’re telling stories from the points of view of different people with different backgrounds. I think this is a step in that direction. I hope this movie appeals to a lot of people because everyone will be able to find themselves somewhere inside of it, and that’s the most exciting part for me.

As a queer Black man working in Hollywood, what do you hope Hollywood does next when it comes to representation and inclusion in the entertainment industry?
Brandon Kyle Goodman: I hope that Hollywood starts to put their money where their mouth is. I think everyone has noticed that inclusion is the problem. I mean, how many years have we had #OscarsSoWhite, right? So it’s not new information, but people I think have just felt comfortable casting a Black person, a queer person, or hiring one Black person to write on the show. Now with where we are, it’s about Hollywood acknowledging just how important movie and TV and media is in terms of how our society functions, and then taking the necessary steps to promote Black people, queer people, women, Latinx people inside of the studios and inside of the networks. But also creating opportunities for more people who are not White to get into the industry, and then mentoring them, taking care of them, and not just letting them drown in a job that they haven’t been taught how to do. I think what’s scary is that in order to successfully do that there’s going to be some messing up that has to happen. I’ve said this about allyship. You’re going to mess up your allyship. This is new territory, but you learn from your mess-ups and you continue to build. I think it’s just about the industry really saying that we have to have these hard conversations. We have to start including more people and not just saying we have a Black person, but actually giving them power, giving them a voice, actually listening to them, and actually hiring more than one Black person on a series or whatever it is. To me, it’s a conscious choice. It’s a choice that you make. It’s not about being forced to make it. It’s really saying that we understand our power, and we’re passionate about Black people, we’re passionate about Black lives, we’re passionate about Black experiences, we’re passionate about sharing that, and we’re going to build the infrastructure to do that.

How are you celebrating Pride Month this year?
Brandon Kyle Goodman: It is a different Pride Month, but Pride was built on the Stonewall riots. Pride was built on political action. So it’s actually kind of appropriate right now with everything that’s happening inside of Pride Month because these are the conversations that we all need to be having in the queer community. Having the queer community and Pride Month coincide with how do we support all Black lives actually is the most appropriate month that we can have. So I know that maybe we’re not on floats and not able to go to bars together, but we’re able to take action together. That is really what is the most important, that we all as queer people take action on behalf of Black lives.

Who is your ultimate LGBTQ icon?
Brandon Kyle Goodman: There are so many I’m thinking of right now. Always Marsha P. Johnson. Always James Baldwin. Also, Billy Porter. I’m just really loving watching him. He’s always been so talented and has always been incredible. Obviously, he’s had this astronomical rise in the last couple of years. Honestly, most of them are Black or of color because I know that living in the intersection of race and queerness is its own bag of tricks and its own set of challenges. There were times where I felt lost and wasn’t sure if I could live my life openly and out. It was very scary being in the industry and saying I’m going to be out and queer and identify as a gay Black man. That was terrifying and, in many ways, probably has hindered me in some respect. But to see a Billy Porter or a Shangela or these other people that I cling to find success and find appreciation and find love inside of our public space always kept me going and always motivated me.

What does Pride mean to you?
Brandon Kyle Goodman: Pride means liberation. It means self-love, like self-love acceptance of myself, which is liberating. To grow up queer and Black and just feel so much shame and to feel so much anger and pain, and then to finally get to that place of pride where you love yourself means everything. I love who I am. I love my community. I love being part of it. That is liberating. So that is what Pride means to me.