Duane Chapman, aka ‘Dog The Bounty Hunter’ has moves! The reality star showed off his tattoos and bare chest in a throwback video of him dancing on Christmas morning. His daughter, Lyssa posted the clip on Father’s Day, and it’s hysterical!

Duane “Dog The Bounty Hunter” Chapman may have a future on Dancing With the Stars. The fugitive-chaser, 67, is all smiles while singing and dancing in an old video shared by his daughter, Lyssa Chapman on Father’s Day, June 21. He was captured wearing nothing but a pair of denim overalls and sneakers, with his bright blonde hair down. Dog, who appeared to be dancing at home on Christmas morning, was clutching a wooden walking stick in the clip — which he later used as a microphone and then a guitar.

Happy Fathers Day DAD. Thanks to GOD for picking me to be be your daughter, and THANK YOU, for picking me as your favorite child ! 😆 Love you ! #DaddysGirl #MyDAD

“Happy Fathers Day DAD. Thanks to GOD for picking me to be your daughter, and THANK YOU, for picking me as your favorite child!” Lyssa joked in the caption of her Instagram post. “Love you!” she wrote, adding the hashtags, “#DaddysGirl” and “#MyDAD.” 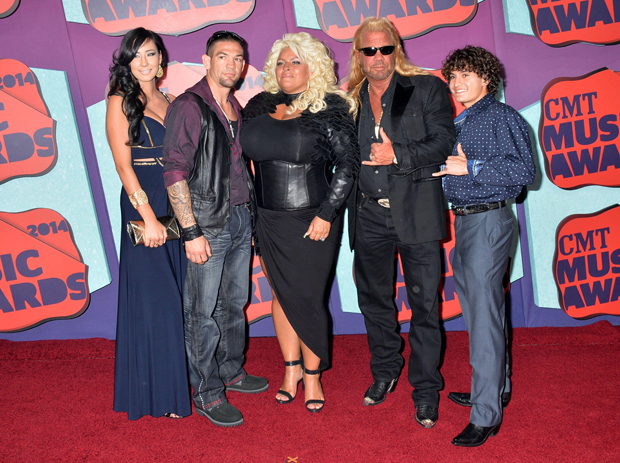 Duane and Beth Chapman with their loved ones at the 2014 CMT Music Awards in Nashville on June 4. (Photo credit: REX/Shutterstock)

“Love is in the air,” she tweeted at the time, alongside a news article about the couple. Lyssa wasn’t a fan of Dog’s last girlfriend, his longtime assistant, Moon Angell. But, that’s the not the case with Francie, who Dog’s other daughter, Bonnie Jo previously said Beth would approve of.

The new couple became engaged in May when Dog proposed to Francie at the home they share in Colorado. Dog’s rep told HollywoodLife, exclusively that the couple “are very happy and looking forward to a long life together.”

Dog and Francie connected after Beth’s passing. Dog reportedly phoned Bob to help him with some landscaping work, and Francie had to inform Dog that Bob had passed away just a few months prior, according to The Sun. Dog and Francie have found comfort in finding each other after tragedy.