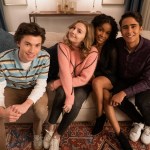 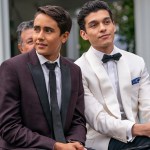 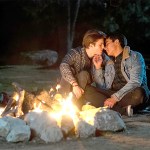 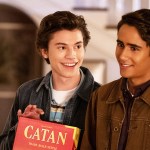 Hulu’s next big TV show is undoubtedly ‘Love, Victor.’ HL spoke EXCLUSIVELY with George Sear all about the charming Benjie, Benjie and Victor’s dynamic, the song he wrote his audition, and more.

Hulu’s Love, Victor, a spinoff of the 2018 film Love, Simon, premieres June 17. Get ready to be obsessed because it’s one of the best new shows of the summer. The series follows Victor, a new student at Creekwood High School. Like Simon Spier from Love, Simon, Victor is on a path to self-discovery in all aspects of his life, including his sexuality. When his family moves from Texas to Atlanta, Victor crosses paths with the charismatic Benjie and sparks fly right away.

HollywoodLife talked EXCLUSIVELY with George Sear about why he was drawn to the role of Benjie. He revealed that he actually wrote a song from Benjie’s perspective to get closer to the character. George also discussed Benjie and Victor’s “connection” and Benjie’s comfortability with being a young gay man.

What stood out about the role of Benjie that made you really want to go for this role?
George Sear: I really got into the character during the auditioning process actually. One of the ways that I connected to Benjie was through his love of music, which is something that I’ve always had myself. I wrote a song in character as Benjie from his perspective during the audition. It was a way for me to feel closer to the character. That was one of the things that just helped me get to know him. I read Becky’s book [Simon vs. the Homo Sapiens Agenda] to have an introduction into the Love, Simon universe. As soon as we got the script, I was even more excited because it was a really, really fun character to play, and it was a great job.

Was the musical aspect of Benjie always in the script? Or was it because you had experience with music that it got incorporated?
George Sear: I guess it was a bit of both. They always had it written that he was a musician. I obviously thought that he’s someone that expresses himself through his form of art. I think it actually heightened my own love for music through doing that, and I’ve been playing a lot more like ever since. It kind of went hand-in-hand.

Whatever happened to the song that you wrote as the character?
George Sear: It’s in the ether somewhere. I think it’s on my Vimeo. I know that some of the creators probably saw it, but I’m not sure. I’m not sure where it went. Maybe it’ll come back from someday.

From the trailer, we get a little glimpse of the dynamic between Benjie and Victor. What fans can expect from their relationship this season?
George Sear: I think it’s one of those things where you have these two characters that meet and have an instant connection. Victor probably quite looked up to Benjie’s confidence because he’s very confident in just being himself. That’s kind of how their relationship starts, and then it grows more and more as they get closer and as Victor gets the job in the coffee shop.

Will we get a little bit of Benjie’s backstory over the course of the season?
George Sear: As he gets closer to Victor you see, just like anyone when they get close to someone, their vulnerabilities and the things they’ve been through.