“You might have read this weekend the amazing story that the Korean band BTS donated $1 million to Black Lives Matter,” James Corden said during the June 8 episode of The Late Late Show. “Upon seeing this news, BTS’ fans, known as the BTS ARMY, pledged to match their donation, raising another million dollars in less than twenty-four hours.” James notes that “while [President Donald Trump] is busy threatening military force, it’s clear the only troops we should be sending in right now the BTS ARMY. And we wanted to thank all the BTS fans for their phenomenal work [over] these past few days, and what better way could we do that than by sharing with them a never-before-seen clip of BTS from our ‘Carpool Karaoke‘ ?” 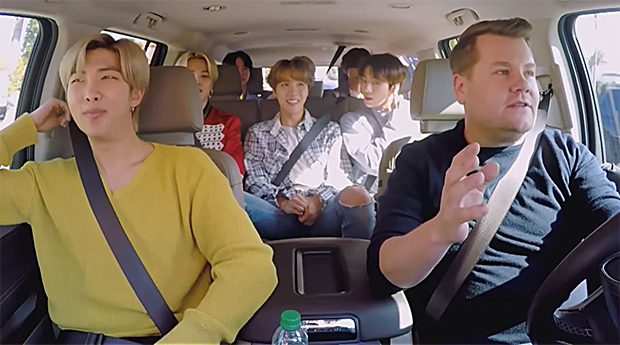 BTS first voiced their support of Black Lives Matter with a June 4 statement. “We stand against racial discrimination,” the band’s official Twitter account tweeted. “We condemn violence. You, I, and we all have the right to be respected. We will stand together. #BlackLivesMatter.” Days later, Variety reported that BTS and Big Hit Entertainment made the million-dollar donation. “Black people all over the world are in pain at this moment from the trauma of centuries of oppression,” Kailee Scales, managing director for Black Lives Matter, told Variety. “We are moved by the generosity of BTS and allies all over the world who stand in solidarity in the fight for Black lives.”

This isn’t the only way that K-Pop has recently struck a blow against white supremacy and systemic oppression of Black people. James noted, before introducing the clip, that numerous fandom groups — BLACKPINK’s BLINK, NCT 127’s NCTzens, TWICE’s ONCE, EXO’s EXO-L’s – came together to flood the #BlueLivesMatter, #WhiteLivesMatter, #WhiteoutWednesday, and #AllLivesMater hashtags with animated gifs and fancams featuring their faves.

Rapper Jay Park, GOT 7’s Mark, DAY6’s Jae, and rapper pH-1 have also announced on social media that they’ve donated to the Black Lives Matter movement, per CNN. CL, of the now-disbanded 2NE1, issued a statement on Instagram: “Artists, directors, writers, dancers, designers, producers, stylists in the K-POP industry are all inspired by black culture whether they acknowledge it or not. Let’s send them love and support by caring, elevating black voices, educating ourselves, and bringing awareness to people around you.”

Related: James Corden’s Wife Julia Carey: Everything To Know About Their 10+ Year Relationship