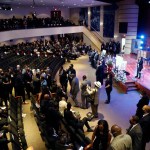 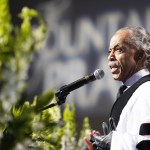 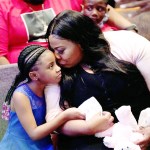 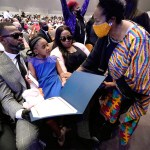 Joe Biden honored George Floyd in Houston on June 9 with a beautiful video message played at his funeral. The inspiring address comes one day after he met with his family in person.

Former Vice President Joe Biden paid tribute to George Floyd at his Houston funeral on June 9, speaking directly to his family and with mourners in a pre-recorded video message. Biden, 77, focused much of his inspiring message on Floyd’s family, including six-year-old daughter, Gianna Floyd. “To George’s children and grandchild, I know you miss your dad and your granddad. Little Gianna, as I said to you when I saw you yesterday, you’re so brave. Daddy’s looking down and he’s so proud of you,” he said. You can watch Biden’s address below:

Biden, who became the 2020 Democratic nominee for president days earlier, was originally supposed to attend the funeral itself, but his Secret Service team didn’t want to cause any disruptions. “Now is the time for racial justice,” he said. “That’s the answer we must give to our children when they ask ‘why’. Because when there is justice for George Floyd, we will truly be on our way to racial justice… And then, as you said Gianna, your daddy will have changed the world.”

Biden flew to Houston on June 8 to meet with Floyd’s family ahead of his massive, public memorial. The Floyd family’s lawyer, Benjamin Crump, tweeted a solemn photo of himself and Biden, 77, standing alongside the Reverend Al Sharpton, Representative Cedric Richmond (D-LA), and Roger Floyd, George’s uncle. “Listening to one another is what will begin to heal America. That’s just what VP @JoeBiden did with the family of #GeorgeFloyd — for more than one hour,” Crump tweeted. “He listened, heard their pain, and shared in their woe. That compassion meant the world to this grieving family.”

“They’re an incredible family,” Biden later told Norah O’Donnell on CBS Evening News. “His little daughter was there, the one who said ‘daddy’s going to change the world’, and I think her daddy is going to change the world.” Floyd, an unarmed black man, died in Minneapolis on May 25 after a white police officer, Derek Chauvin, knelt on his neck for nine minutes as he pleaded, “I can’t breathe.” Chauvin and the three other officers on the scene were arrested and charged with a litany of crimes, including second degree and third degree murder for Chauvin. Floyd’s death sparked worldwide protests asking for justice against rampant police brutality and racism in the United States.

Floyd’s brother, Philonise Floyd, told Sharpton on May 30 that he had recently spoken with Biden over the phone: “I never had to beg a man before but I asked [Biden] could he please, please get justice for my brother, please. Because I need it, I just don’t want to see him on a shirt like those other guys. Nobody deserves that.”

Biden delivered a somber speech from Philadelphia on June 2, calling for immediate action on police reform from Congress. He asked Congress to “act and act now” by passing a police reform bill banning chokeholds. He condemned President Donald Trump in the speech for “fanning the flames of hate” by his response to the protests. Trump had tweeted that protesters were “thugs” and threatened to invoke the Insurrection Act against them.

He had DC protesters teargassed so he could go to a nearby church for a photo op with a bible. “‘I can’t breathe. I can’t breathe.’ George Floyd’s last words, but they didn’t die with him,” Biden said in his speech. “They’re still being heard echoing all across this nation.”