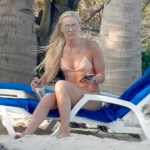 Helen Hunt showed off her amazing genes, right on the beach! The supermodel hit the Malibu shore with a body board and her toned abs on June 7.

Helen Hunt, 56, is proof that living a happy lifestyle is the best fitness routine there is! The As Good As It Gets star showed off her toned tum and lean legs while enjoying a bodyboarding session at a beach in Malibu on June 7. She rocked Asceno’s “The Genoa triangle bikini top” and the matching “Naples low-rise bikini briefs,” a bikini set that retails for a total of $228.

Although Helen has been hitting the waves for more than 10 years, the actress doesn’t credit her sporty lifestyle for her fit figure. “I don’t surf anywhere near enough for that to be having to do with anything,” Helen admitted in a 2015 interview with Healthy Living Magazine. “I don’t know…as a general rule, I tend to move.”

Helen doesn’t couple that mantra to move with a fad diet, like Keto or juice cleanses. “I don’t go to a gym ever. I don’t diet ever,” Helen further revealed in the interview. “I used to diet but sometime after the eighties, it made me miserable, but I do like to walk, run, and I do like to surf when I can just to warm it up, and I do enjoy doing yoga when I can get there.”

“It’s a religion for me to never diet,” Helen even ventured to say. “I think it makes you unhappy. It makes for unhappy things, so I just decided I would rather not have the perfect body, not have the body I want than diet. And when I dropped the idea of dieting, my body went closer to the way that I was wanting it to be.” There you have it — the key for the perfect bikini body this summer is to not stress over the idea of being “perfect.”

Helen’s acting career has also kept her constantly on the move! There was her role as Sarah Jessica Parker’s dancing BFF in Girls Just Want to Have Fun in 1985, and then as a surfer in the movies in Soul Surfer (2011) and Ride (2015).