Khloe Kardashian and Tristan Thompson continue to prove that they are amicable exes who support one another. The Cleveland Cavaliers player, 29, shared kind words about the mother of his 2-year-old daughter, True Thompson, under a series of selfies (seen here) she shared on May 22. Khloe, 35, debuted a new “bronde” (brown/blonde) hair makeover, but fans were quick to comment that her face looked “so different.” But, Tristan didn’t think so.

“Tristan feels very protective of Khloe and doesn’t like to see people discuss her looks,” a source close to the Kardashian family tells HollywoodLife, exclusively. “He knows she can hold her own, but he tells her she’s gorgeous all of the time, both publicly and privately. He’s always been good about that. Khloe appreciates when Tristan has her back and makes nice comments, but she doesn’t need them to feel good about herself,” the source explains. “Their relationship status is still what it’s been — they’re co-parenting and just figuring things out one day at a time.” 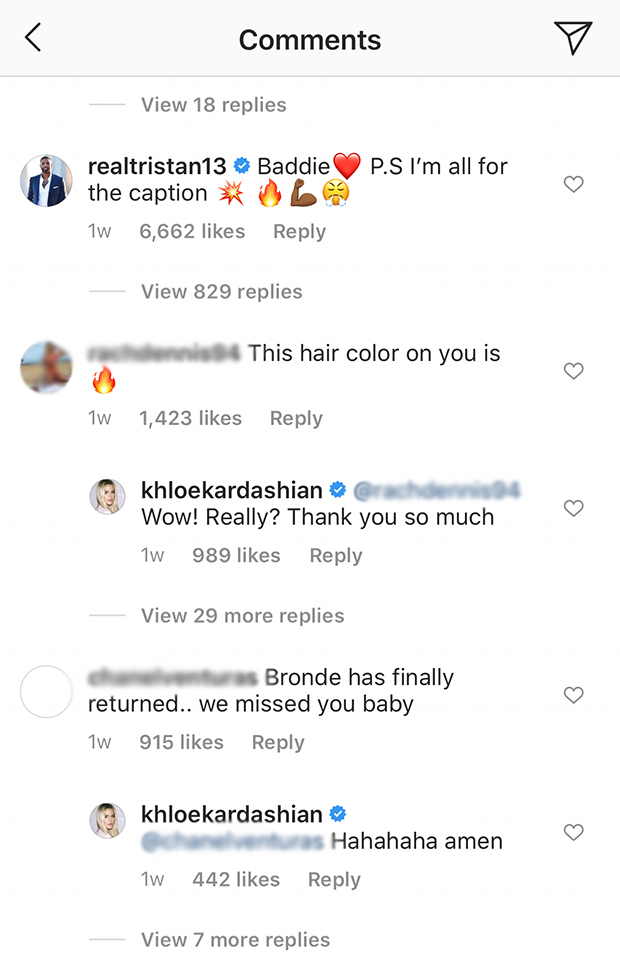 After Khloe debuted her new darker locks, Tristan wrote “baddie” underneath her post, along with fire, heart and muscle emojis. Kris Jenner also added that her daughter looked “gorgeous” in the new photos. Khloe has since responded to the spew of negative comments on her post. And, she seems unfazed to say the least. In response to fans who asked why her face appeared “different,” Khloe joked, “From my weekly face transplant clearly.”

The source went on to explain that Khloe doesn’t take Instagram so seriously.  “If you see Khloe in person, you see she doesn’t look extremely different all of the time, so she thinks it’s ridiculous that people pick apart her photos. She uses several different apps and filters and has fun with the photos she takes and posts, as do all of her sisters. She doesn’t even think about it when she posts,” the source says, explaining, “She takes a ton of photos and spends time picking and posting the best one just like any other woman. Khloe isn’t one to just sit silent and let people talk about her or her loved ones which is why she speaks up. She’s sensitive, so it does bother her in the slightest bit, and she also knows it’s not true. It’s a picture and people need to relax.”

Khloe and Tristan, who revealed they were quarantined together when they celebrated True’s second birthday together in April, are not back together. At least they haven’t revealed the latter. The exes split last February after Tristan was caught cheating on Khloe more than once — one specific time being with former Kardashian family friend, Jordyn Woods.