Kristin Cavallari‘s former best friend, Kelly Henderson addressed rumors that she had an affair with the television personality’s husband Jay Cutler, while they were still married. She got into a back and forth with numerous Instagram users, who claimed she was taunting the affair rumors by leading fans to believe that the man in a recent photo she shared is Jay.

“Much needed happy hour. Happy Friday y’all,” Kelly captioned a photo on May 1 of her sipping wine with an unidentified male. The pair, whose faces were not visible in the photo, were pictured wearing matching beaded bracelets. Apparently, Jay wears a similar bracelet, according to fans, who made Kelly aware of their opinions in the comments.

“I wear that bracelet everyday and had no f—king clue that you guys would make this into a thing,” Kelly wrote back to a critic. “FYI — basically all kids make those. Especially in quarantine. I know it doesn’t matter what I say, because you guys will make up whatever you want, but I know my truth. Sorry you are choosing to keep wasting your time on bulls—t.” 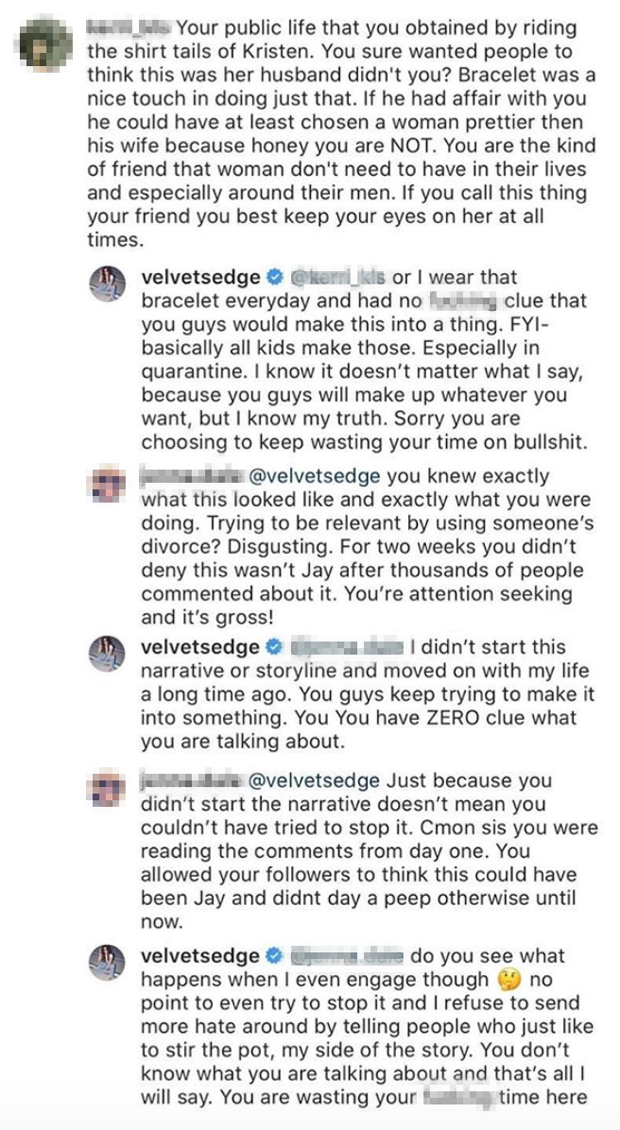 She continued, “I didn’t start this narrative or storyline and moved on with my life a long time ago. You guys keep trying to make it into something. You You have ZERO clue what you are talking about.”

When critics claimed she should have stopped the affair rumors, Kelly replied: “Do you see what happens when I even engage though. No point to even try to stop it and I refuse to send more hate around by telling people who just like to stir the pot, my side of the story. You don’t know what you are talking about and that’s all I will say. You are wasting your f—king time here.”

Earlier this week, Kelly addressed the same photo (seen above) and said that the man in the photo is her boyfriend, who she described as a “private person.”

“It’s my boyfriend … I’ve been in a relationship for quite some time now,” she said in an interview on celebrity divorce attorney, Laura Wasser‘s podcast, All’s Fair. “He is a very private person and I respect that. You know, him and his kids are a huge part of my life now, but I try to keep them out of the public part of my life because it’s not what they signed up for.”

In the same interview, Kelly denied that she played a part in Kristin and Jay’s divorce. “I’m just gonna go ahead and put this out there, there was never an affair, I have nothing to do with their divorce, and I am not dating Jay Cutler,” the stylist stated. “We’re not really in touch anymore, we had a little bit of a falling out last year, so I’ve kind of gotten some space from both of them,” Kelly said about former friends, Kristin and Jay, noting that she wishes them well.

The affair rumors were the reason behind Kristin and Kelly’s friendship ending on the latest season of the E! series, Very Cavallari, which Kristin has since departed, following her divorce news. After Kristin maintained that she did not believe rumors that Kelly had slept with Jay, she felt as though Kelly, being her best friend at the time, didn’t express enough remorse for the situation.

Kristin and Jay announced their split in a joint statement on Sunday, April 26. Despite coming to the “loving conclusion” to end their 10-year relationship (and six-year marriage), Jay filed for divorce the next day, citing “irreconcilable differences” — and, Kristin hit back citing “inappropriate marital conduct” as grounds for divorce. HollywoodLife obtained the official court documents Kristin filed as a counter complaint to Jay filing for divorce.

The pair came to a custody conclusion in new court documents filed in Tennessee on May 4, and also obtained by HollywoodLife. Kristin and Jay agreed to share custody (50/50) of their three children together — sons Camden, 7, and Jaxon, 5, and daughter Saylor, 4 — as part of their ongoing divorce battle.