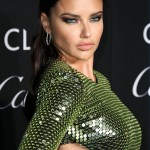 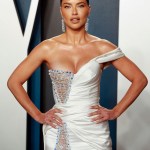 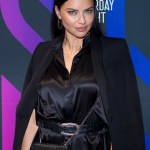 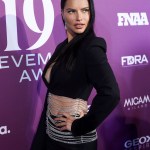 Why worry about the troubles of the world when you can lounge about wearing next-to-nothing? Adriana Lima shared the secret to her happiness while catching some sun near South Beach.

“GRATEFUL TO BE WITH MY KIDS AND FRIENDS [In] M.I.A.M.I. – Florida,” wrote Adriana Lima, 38, in the caption of her May 17 Instagram post. While the mother of two – Valentina Jaric, 10, and Sienna Jaric, 7 — was grateful for the chance to social-isolate with her family, her fans were grateful for her tiny string bikini. The model and occasional actress shared a snap of her lounging on an outdoor couch while in a very skimpy swimsuit. Adriana looked absolutely gorgeous, and her adoring followers quickly flooded the comments section with messages of love.

Speaking of messages of love, Queen Latifah, 50, revealed herself as one of Adriana’s admirers. During a Girls’ Trip version of Red Table Talk on April 15, Queen spoke with Regina Hall, Tiffany Haddish, and Jada Pinkett Smith about celebrity crushes. “I like the girl. She’s a Brazilian model,” the “U.N.I.T.Y.” rapper said, which Jada responded, “Oooh! You’re talking [about] Adriana Lima. She’s a cutie.” Queen Latifah agreed and noted that Adriana has “that fire.” The best part is that Adriana was incredibly flattered by Latifah’s crush – to the point that she invited her over for dinner!

“Apparently, this happened early on, and I was like, ‘Omg for real? I can’t believe this.’ Just take a look,” the model said in a series of Instagram Stories a day after the Red Table Talk. She posted a screen-grab of a news story about Queen’s admission, and Adriana said she was “thrilled” to be the rap icon’s crush. “Listen when this situation is finished, we should meet and have dinner or something, ok? I hope you and your loved ones are well and safe, and thank you so much for the love ok, kiss,” she said before blowing a kiss to the camera.

✨GRATEFUL TO BE WITH MY KIDS AND FRIENDS MIAMI-Florida ✨

Before “this situation” – aka the global outbreak of the novel coronavirus —  began, Adriana had a much different plan for 2020. She started the year off by releasing her highly anticipated Privé Revaux sunglasses collection, and she told HollywoodLife that she had two assistants when designing the shades. “I have to say my daughters were involved, Valentina and Sienna. They chose the colors, and I’d put together my favorite kind of styles and shapes of sunglasses, and what I think is timeless and fashionable,” she shared EXCLUSIVELY with us. “We put it together, and we chose the designs and colors and the lenses and the shades, everything, with my kids.”