Island Express Helicopters has responded to the wrongful death lawsuit filed by Vanessa Bryant on February 24. In new court documents, filed on May 11 and obtained by HollywoodLife, the Los Angeles-based helicopter company argues that Kobe Bryant , 41, and his daughter Gianna “Gigi” Bryant, who was 13 at the time of the fatal crash, “had actual knowledge of all of the circumstances, particular dangers, and an appreciation of the risks involved and the magnitude thereof” of flying in the Sikorsky S-76B helicopter on January 26. The legal documents also claim that the Lakers legend and his teenage daughter therefore “voluntarily assume the risk of the accident, injury, and damages.”

Island Express Helicopters go on to “claim that they are not responsible for Plaintiffs’ damages due to an act of God.” The court documents also allege that “damages were proximately caused by one or more unforeseeable, independent, intervening, and/or superseding events beyond the control of and unrelated to any actions or conduct.” In the court documents, the helicopter company includes 28 defenses denying responsibility for Kobe and Gigi’s deaths. 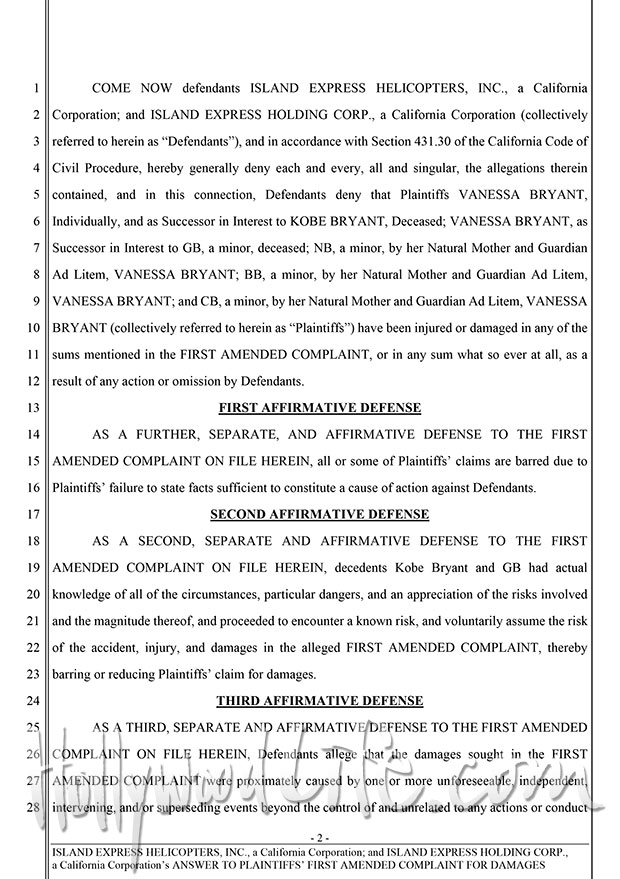 (Photo credit: Superior Court of the State of California)

Island Express Helicopters’ response came shortly after Berge Zobayan, the brother and representative of the pilot Ara Zobayan, issued a response to the wrongful death lawsuit filed by Vanessa. In separate court documents, filed on May 8 and also obtained by HollywoodLife, Berge argues that all passengers are to blame for the fatal crash.

Vanessa filed a wrongful death lawsuit against  the pilot, Ara and the helicopter company, Island Express on February 24, “seeking compensatory and punitive damages stemming from a helicopter crash in Calabasas, California on or about January 26, 2020, which resulted in the deaths of Kobe Bryant and GB, minor,” according to the legal documents obtained by HollywoodLife.

Kobe, Gigi and the other seven passengers (including the pilot) who perished in the crash were traveling to a youth basketball game at his Mamba Sports Academy in Thousand Oaks, CA. Our thoughts are with the families affected by this tragedy.