Berge Zobayan, the brother and representative of Ara George Zobayan, has responded to the wrongful death lawsuit filed by Vanessa Bryant on February 24. Ara is the pilot who was killed alongside Kobe Bryant and seven others in a helicopter crash in Calabasas, CA earlier this year. In new court documents, filed on May 8 and obtained by HollywoodLife, Berge argues that all passengers are to blame for the fatal crash. Passengers included: Kobe, 41, his daughter Gianna aka “Gigi,” 13, Alyssa Altobelli, 14, John Altobelli, 56, Keri Altobelli, 46, Payton Chester, 13, Sarah Chester, 45 and Christina Mauser, 38. HollywoodLife has reached out to Vanessa Bryant’s lawyer for comment.

The legal documents state that “any injuries or damages to plaintiffs and/or their decedent were directly caused in full or in part by the negligence or fault of plaintiffs and/or their decedent, including their knowing and voluntary encounter with the risks involved, and that this negligence was a substantial factor in causing their purported damages, for which this answering defendant bears no responsibility.” Berge is also demanding a jury trial and lists Bryant’s surviving daughters — Natalia, 17, Bianka, 3, and 10-month-old Capri — as plaintiffs, according to the court documents.

Vanessa filed a wrongful death lawsuit against Ara and the helicopter company, Island Express on February 24, “seeking compensatory and punitive damages stemming from a helicopter crash in Calabasas, California on or about January 26, 2020, which resulted in the deaths of Kobe Bryant and GB, minor,” according to the legal documents, also obtained by HollywoodLife. 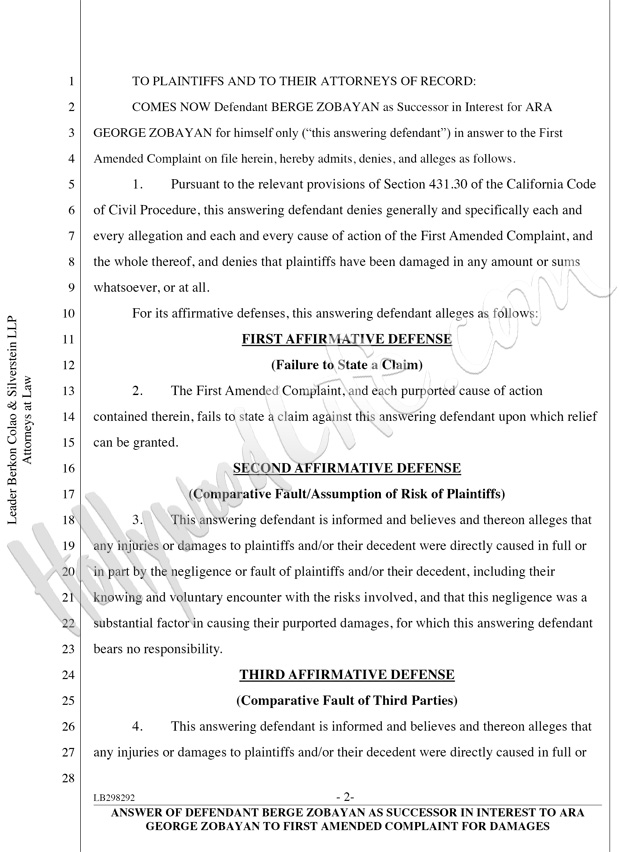 (Photo credit: Superior Court of the State of California)

On February 7, The National Transportation Safety Board (NTSB) released an investigative update on the helicopter crash, which HollywoodLife obtained. At the time, the report on the crash found no evidence of engine failure or mechanical issues. The investigation is still ongoing.

Kobe, Gigi and the other seven passengers (including the pilot) were traveling to a youth basketball game at his Mamba Academy in Thousand Oaks, CA on the morning of January 26. At around 10 a.m., Kobe’s Sikorsky S-76B helicopter crashed into a mountain, caught fire and fell from the sky, killing everyone on board.

In April, Vanessa and Kobe would’ve celebrated their 19th wedding anniversary. Gianna and her two Mamba Academy teammates, Alyssa and Payton were selected as honorary picks during the 2020 WNBA draft on April 17. Our thoughts are with the families affected by this tragedy.