Tyler Cameron is speaking his truth. And, his days of finding love on television may be over. The Bachelorette alum, who was came in second place on Hannah Brown‘s season (May 2019), explained why fans won’t see him on any future seasons of Bachelor in Paradise in a new interview published on Thursday.

“I’m gonna be honest. I feel like it would just be like all downhill,” the model, 27, admitted on Barstool’s Chicks in the Office podcast. Tyler was joined by BIP alum, Dylan Barbour, who found love on the show with Hannah Goodwin. The two got engaged during BIP‘s season 6 finale, and are currently planning their wedding.

“You’d absolutely just get ruined,” Dylan, 25, said, alleging that the network, “would make you look so bad. Oh, my God … You had such a great rise that they’d be like, ‘Alright we need to have him fall. What else are we supposed to have him do? Just keep rising?’” 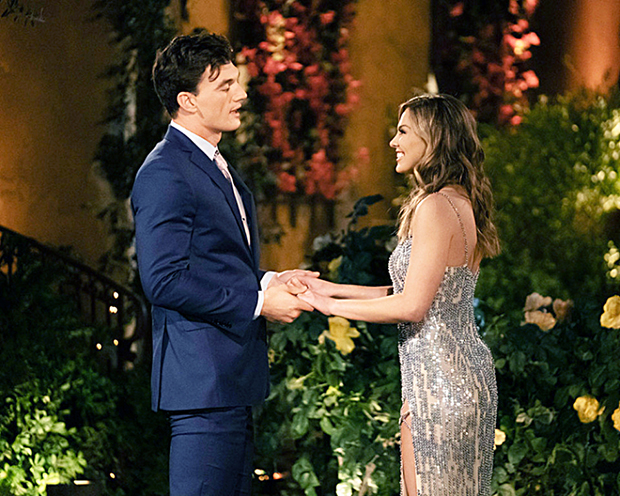 Tyler Cameron and Hannah Brown on season 15 of ‘The Bachelorette’ in May 2019. (Photo credit: ABC)

Ultimately, finding love in the sand and sun (on BIP, anyway) just isn’t in the cards for Tyler. “I’m a one-woman kind of guy,” he said, which doesn’t line up with theme of the hit ABC show.

Tyler’s dating life has been under a microscope since Hannah Brown, 25, gave her final rose to Jed Wyatt during the finale of her season of The Bachelorette last May. However, they split shortly after, which led to her spending a night with Tyler. Things between the two quickly fizzled out, and he quickly moved on with supermodel, Gigi Hadid in August 2019.

The models, who looked like a match made in heaven, were photographed together on many occasions in New York City. But, their romance was over by that October. Gigi moved on (sort of) with her ex, Zayn Malik. She confirmed that they’re expecting their first child together during a virtual interview with Jimmy Fallon on April 30.

Fans thought Tyler would end up with Hannah after they spent four weeks together during the COVID-19 pandemic. The exes raised eyebrows about the status of their “friendship” when they quarantined with friends at his home in Florida. Hannah eventually returned home to her native, Alabama, and the two have maintained that they’re single and just friends.