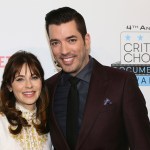 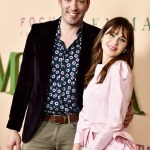 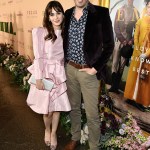 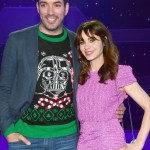 Love is in the air for Zooey Deschanel and Jonathan Scott, and what better way to celebrate it than on the Property Brothers star’s 42nd birthday! The New Girl actress, 40, took to Instagram on April 28, posting an adorable black and white image of herself giving Jonathan a smooch on his cheek. Her caption, however, was even cuter! “This amazing person makes me truly happy every single day and fills my life with love and joy,” the actress and She & Him frontwoman began her post. “Happy birthday @mrsilverscott! You are one of a kind wonderful. So happy I get to make your birthday cake,” she concluded her sweet caption, adding cake, heart, and heart face emojis!

While quarantining together, Jonathan and Zooey have filled their social media accounts with adorable snapshots of their relationship. But that’s nothing new for the lovebirds, who have been dating since September 2019. In fact, Zooey shared a similar photo of her and Jonathan cozying up back in November! In the black and white picture, Zooey gave Jonathan a kiss on the cheek while he beamed at the camera. “Cutie,” she captioned the image, referring to her sweet BF.

But some of Zooey and Jonathan’s innocent social media flirting led fans to believe that the pair might be walking down the aisle in the future! During a sweet exchange on January 7, Zooey shared an image with her “one and only prom date” celebrating the new year! “May I have this…and all future dances?” Jonathan asked in his comment. “Yes! Can’t wait. You’re my favorite dance partner,” the actress emphatically replied. Soon, fans were leaving comments speculating as to whether or not Jonathan had popped the question! “@mrsilverscott sounds like a proposal to me idk,” one user wrote, while another asked Zooey, “did you just get engaged?”

This amazing person makes me truly happy every single day and fills my life with love and joy. Happy birthday @mrsilverscott! You are one of a kind wonderful. So happy I get to make your birthday cake. 🎂❤️🥰

It seems, however, that Zooey and Jonathan are still enjoying their time together just dating, with no pressure for an engagement quite yet. Prior to their relationship, Zooey was married to Jacob Pechenik, with whom she shares two children — Elsie Otter Pechenik, 4, and Charlie Wolf Pechenik, 2. Jacob filed for divorce in October 2019, after the couple split and Zooey’s romance with Jonathan went public. Jonathan was also previously married to Kelsy Ully from 2007-2013. Following their divorce, Jonathan dated Jacinta Kuznetsov from 2015 until their split in 2018.