Zooey Deschanel and BF Jonathan Scott have both posted romantic cryptic Instagram messages about their future together, which have fans sure that they’re engaged.

The Golden Globes was a big Hollywood night out for Zooey Deschanel and her boyfriend Jonathan Scott. The 39-year-old actress brought him as her date to the various parties on Jan. 5 and they even posed for sweet photos at one of them. In a green booth, a smiling Zooey stood in front of her Property Brothers beau, who leaned into her head. “One more with my one and only prom date @mrsilverscott ❤️,” she captioned this photo she shared to her Instagram on Jan. 7 that really did look like a prom pic. But Jonathan’s response has fans thinking they could be getting engaged.

“May I have this…and all future dances?” the 41-year-old wrote under Zooey’s caption. That sent fans into a frenzy underneath his comment. User danatedeski wrote “@mrsilverscott sounds like a proposal to me idk …. 🤔,” while pogipuppy asked, “@zooeydeschanel did you just get engaged?” User hollt739 questioned, “@mrsilverscott is that a proposal?” while hughe017 told Jonathan, “@mrsilverscott Marry her! STAT! 💍.”

Zooey then made fans go even more wild when she responded to Jonathan’s question with “Yes! Can’t wait. You’re my favorite dance partner,” which sure sounded like she was accepting the offer of all future dances that her man asked for.  Zooey’s response caused user onescaredkitty to comment, “@mrsilverscott This is so exciting. This looks like a totally done deal!!!” and kelliology to tell Jonathan, “Ring on it!!! 💍 🤣.” 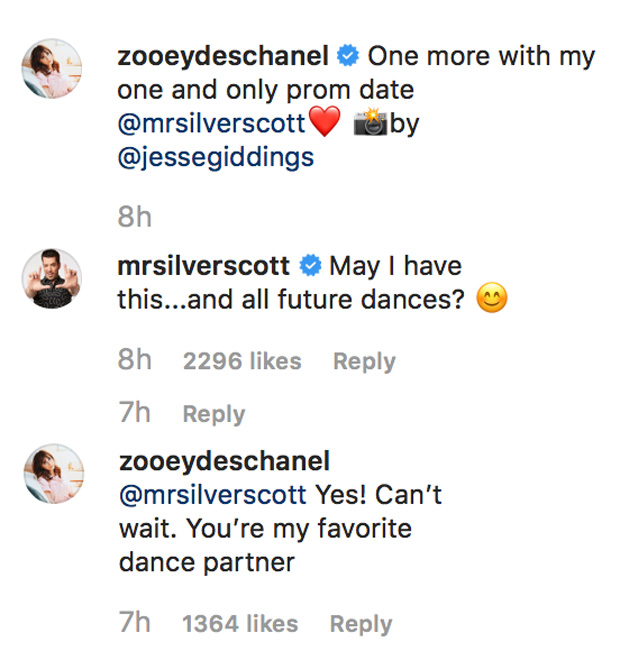 Zooey and her estranged husband Jacob Pechenik announced their split on Sept. 6 after four years of marriage and two children, saying they were better off as friends and co-parents. A week later HollywoodLife.com showed you the very first EXCLUSIVE photos of Zooey and Jonathan strolling hand in hand in Silver Lake, CA. The two initially met during an Aug. 4 Carpool Karaoke taping and really hit it off. Barely four months later and Zooey and Jonathan seem to be hinting they want to spend a lifetime together!