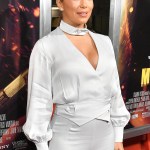 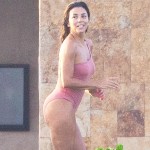 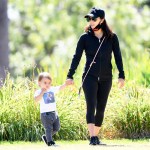 Eva Longoria happily showed off her grey roots before covering them up in a blink or miss it new video!

Eva Longoria, 45, was serving some before and after realness while remaining gorgeous in between in an Instagram video posted on Tuesday, April 21. The former Desperate Housewives actress put her grey roots on display before covering them up with a product from L’Oreal (for which she has been a longtime spokesperson for). “Hi guys! Look at all this grey,” she pointed out in her bathroom while wearing a loose-fitting white top. “This is crazy! If you’ve been following me you know I’ve been going grey. So I have my favorite solution!” Eva then demonstrated the product she was promoting which clearly worked as her grey roots went from visible to non-existent in a matter of seconds. Fans and celeb friends, including Olivia Munn, 39, were impressed with the results. “That stuff is amazing!!” the former Chuck star wrote in the comments section. “Your hairline still looks natural too!”

The gorgeous television and movie star has been keeping busy in many different departments while remaining in self-isolation over the past month. She’s been spending oodles of time with her adorable son Santiago, 1, who she welcomed into the world with husband José Bastón, 52, in June 2018. Eva exercised with her baby boy on Friday, April 17, where she did sit ups and hip lunges with him acting as a weight on top of her! Too cute!

Desperate Housewives fans were also in for a big treat when Eva did a virtual reunion with many of her former costars on Stars in the House, a daily online mini-show hosted by SiriusXM’s Seth Rudetsky and James Wesley, on Sunday, April 12. She, along with Marcia Cross, Vanessa Williams, Dana Delaney and Brenda Strong, were all present as they gabbed about their favorite moments on the show, which premiered way back in 2004!

The mother-of-one and Marcia spoke quite highly of her castmate Felicity Huffman, 57, who did not participate in the reunion along with Teri Hatcher and Nicollette Sheridan. “Felicity and I have such a strong connection…we’ve all created these lasting friendships,” Eva gushed.